He reaches heights,fathoms the depths 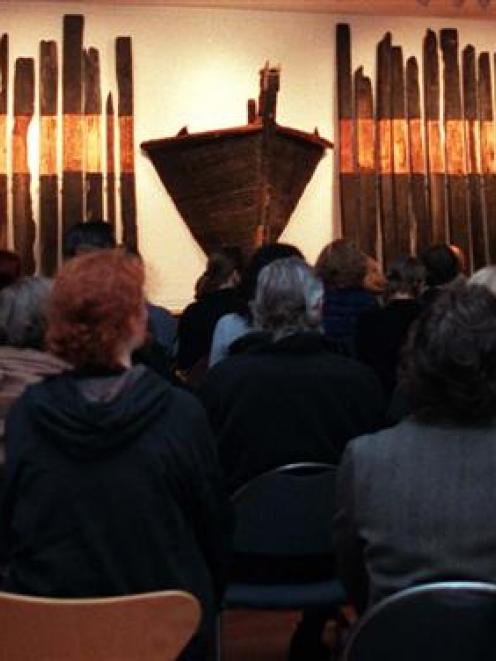 The theme of the poetic presentation at the Dunedin Public Art Gallery as part of the Wordstruck! festival for readers and writers in 2000. Ralph Hotere's Black Phoenix provided the backdrop as about 170 people listened to poets Hone Tuwhare, Cilla McQueen, David Eggleton and Bernadette Hall. Photo by Craig Baxter.
The exhibition "Ralph Hotere: Zero to Infinity" opened at the Hocken Collections on Friday night, celebrating the artist's 80th birthday.

Frances Hodgkins (1869-1947) was the best regarded New Zealand artist of her generation. Colin McCahon (1919-87) is considered the outstanding talent of his. Similarly, among critics, Hotere (born 1931) is identified as this country's foremost living practitioner.

All were formed or reformed as creative personalities in Dunedin.

They all studied at the local art school.

This is a remarkable phenomenon without parallel in New Zealand and deserves serious attention, but this is not the occasion to explore it. Rather, the exhibition is an opportunity to enjoy some commanding works and to meditate upon one man's extraordinary production.

Forty years ago, the Oxford Companion to Art hailed Hotere as a rising star above the New Zealand horizon.

So he was and the solemn, yet joyful black paintings, gleaming with their incandescent towers of shimmering colour rising like soaring music through the black fields, were there to prove it. But there has been so much more since then.

I remember thinking, 20-odd years ago, heading to new Hotere shows, that surely there could be nothing more to surprise us. But there was, again, and then again, until all such speculation became permanently suspended.

There were the great arrases, painted hangings, such as Rain which long dignified the entrance of the Richardson building.

There were the brilliant blowtorch paintings on stainless steel, the flame creating iridescent blooms across their gleaming, impenetrable surfaces.

And then there were the power grinder works, also on stainless steel, opening up those surfaces like etching, broadly drawn on the steel with the confidence of a master as sure in his touch as Hokusai. Hotere is a very fine draughtsman and painter, not to mention being also one of our finest colorists, though none of these skills by itself, or together, make a great artist. There needs to be an ability to direct the skills to good purpose.

The 1980s saw Hotere expanding into installation with the incomparable Black Phoenix, now in Te Papa. There have been collaborative works, such as P.R.O.P. of 1991, produced with Bill Culbert and now in the Dunedin Public Art Gallery.

Fluorescent tube lights and sheets of black corrugated iron may not sound promising materials but the resulting array of glowing white on shiny black signals something primal abstracted from nature, like a piano keyboard while staring down the viewer with its imposing presence.

And then, when you might have thought painting and delicacy had been relegated, there were the gold works of the early 1990s.

Returning to recycled sash frames, Hotere blacked their glass with lacquer and relieved that stern opacity with crinkled gold leaf and gaseous blooms of dusted gold. The delicacy and intensity of the resulting paintings is like the wonder of the stars at night illuminated with visual gasps of pleasure.

By that point, I considered myself pretty much immune to surprise but I still wasn't prepared for Blackwater (1999), another collaboration with Culbert, using fluorescent tube lights and black lacquered corrugated iron.

This huge installation lying flat on a pedestal has the tubes rising vertically from the iron, casting light and throwing seriated reflections, broken by the ripples of the iron.

It is a haunting work, evoking Westland lakes at night and in its polarity of black and white, the alpha and omega of eternity.

At that time, and in the early 2000s, Hotere was working again in more intimate, painterly ways, now using mirrors and the silvering and gilding applied to them to make them reflect, to produce dappled and stippled surfaces, sometimes with his wife, Mary McFarlane.

McFarlane works in this medium autonomously, which has created confusion for some. So far as Hotere is concerned, it's just another example of his adaptation of semi-industrial processes and ability to collaborate to powerful effect.

There is a famous work, How to Take off your Clothes at a Party, which nicely reveals the artist's puckish humour: he isn't all sturm und drang.

But he does reach the heights and fathom the depths in works of commanding authority. He has exhibited widely overseas and has lived at times in Britain, France and Spain.

But since 1969 he has based himself in Dunedin, specifically Port Chalmers. He is a shining light in our midst. The exhibition doesn't include all the works here mentioned.

Nevertheless, I strongly recommend it.

•Peter Entwisle is a Dunedin curator, historian and writer.