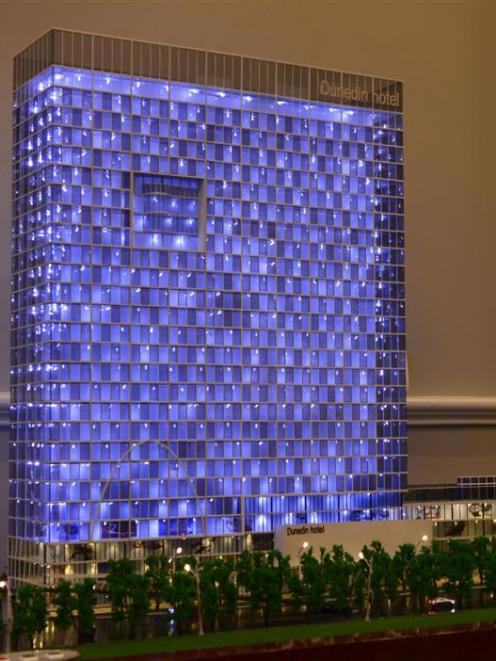 Debate over the hotel proposed for Dunedin's waterfront has been heavily centred on its appearance, size and location. Whether it's too tall, or creates wind problems, will be up to the Dunedin City Council to decide. What the Otago Chamber of Commerce would ask residents to consider, however, is what a large hotel with such quality facilities and accommodation will do for Dunedin.

The benefits to the city's construction industry of a development that will cost $100 million to build are impossible to ignore. This is the initial boost - an extra 100 new permanent jobs in Dunedin's economy, and all the associated needs for services, will be a long-lasting benefit to the city worth millions.

Then there are the flow-on effects of this development to the city's tourism industry. This industry has been a shining light among the gloom of company closures and shifts the city has seen in the past two decades. A five-star facility is just what is needed to significantly grow the lucrative high-end segment of this important economic mainstay. Dunedin restaurants, tourism operators, the casino, museums and retailers all stand to benefit. And new employment opportunities could also come with the type of money this high-end sector, in particular tourists from China, typically spend during their visits. There are also 164 self-contained apartments planned, adding new ratepayers to help share the load of city funding in the future. A snowball effect, as other developers are encouraged to invest in the city, is distinctly possible.

In making an investment in a five-star hotel with 215 bedrooms, two restaurants and two bars, the developers are stating their belief in Dunedin, Otago's business community and tourism industry, and we welcome their interest. They clearly value what the city has to offer, and believe that other like-minded people will appreciate its attributes as they do.

The city's strong historic and present links with the Chinese community are also a major drawcard.

Now is the time to capitalise on those links as trade with Asia becomes central to New Zealand's economic future. In terms of Dunedin's history and current relationship with Shanghai, it is not overly ambitious, but in fact only right and proper, that Dunedin should enjoy some of this economic bounty. The Dunedin City Council and partners, including the chamber, have spent much time and energy creating and obtaining local approval for the Dunedin Economic Development Strategy which includes - as one of seven key targets, Links Beyond Our Borders - improving international investment. And Dunedin residents themselves have recently rated economic growth as a critical imperative for the city's future.

Dunedin needs both domestic and international capital to grow. It sorely needs more jobs. It needs to capitalise on its popularity as a destination. Now is the time for our city to put its words into action.