Sections of trail open to cyclists 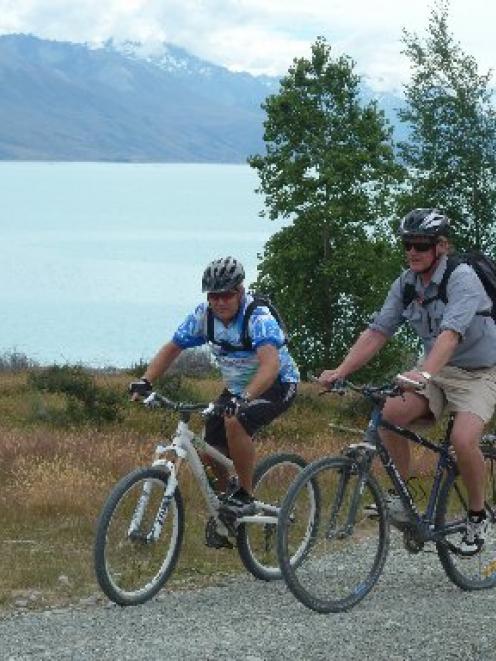 The trail, which will descend more than 780m over 312km from Aoraki Mt Cook to Oamaru, now has three newly completed sections available to be ridden.

The Jollie River-Chop Creek-Tasman Point section, accessed by driving to the northern end of the Braemar-Mt Cook Station Rd on the eastern side of Lake Pukaki, is 10km long with an uphill climb of about 70m.

The return cycling time on the trail, which has been newly graded and may be soft in some places, is about two and a-half hours.

It contains numerous stream crossings - none of which are bridged - and passes underneath Rock Etam and the large rock face of Black Point.

The trail is described as vast and exposed to the weather.

The Lake Pukaki Foreshore section, which was completed in December, has slight inclines but overall is flat.

The 8km section is sufficiently wide for riders to cycle two abreast, and finishes next to the state highway close to the dam.

The 10km Pukaki Flats section lies on Department of Conservation (Doc) land 1.5km north of Twizel on the east side of SH8.

It is very flat, crosses an open block of short tussock grasslands and heads north towards Lake Pukaki.

It forms part of the Te Araroa Trail from Twizel to Tekapo, and heads to an access point to SH8 near the northern boundary of the Pukaki Flats area.

The Lake Pukaki and Pukaki Flats sections can be ridden as one. However the trail that connects the two is not signposted and can be accessed via the road that heads south opposite the entrance to the Lake Pukaki lookout.

"You can ride from Mt Cook Station down the Mt Cook-Hayman road to the beginning of the Lake Pukaki lakeside section," he said.

"There are other parts on roads that can be ridden now such as Otematata to Aviemore and Duntroon to Oamaru, and also Twizel to the Lake Ohau outlet."

The aim was to have the trail open by late November-early December within the amount of funding received, which included $2.5 million from the Government and an estimated $500,000 from other funding sources, including a grant of $80,000 from the Otago Community Trust for the lower Waitaki section, Mr Brownie said.

New project managers were hired in January after the previous manager resigned in November. The joint committee of the Waitaki and Mackenzie district councils, which is overseeing the project, was "very happy with progress to date", he said.

Matt Kyhnn, business development manager for NZbyBike - a cycle tourism and marketing company promoting the trail online and at trade shows - said interest in the trail had been strong.

"We've seen heaps of interest nationwide in the Government's project and the Alps 2 Ocean trail is one of the most searched on our website," he said.

"We've been operating for about 18 months and have about 15,000 visitors a month to our website."

The business is developing a smartphone application that will allow cyclists to access the company's website while on the trail, complete with information about relevant nearby businesses.

The finished trail will be split into eight stages, each of which could be completed in one day.

Also on offer will be the Pukaki, Benmore, Aviemore and Waitaki hydro dams, the Elephant Rocks and Vanished World Centre, as well as Maori rock art.