Rare penguins back in sound 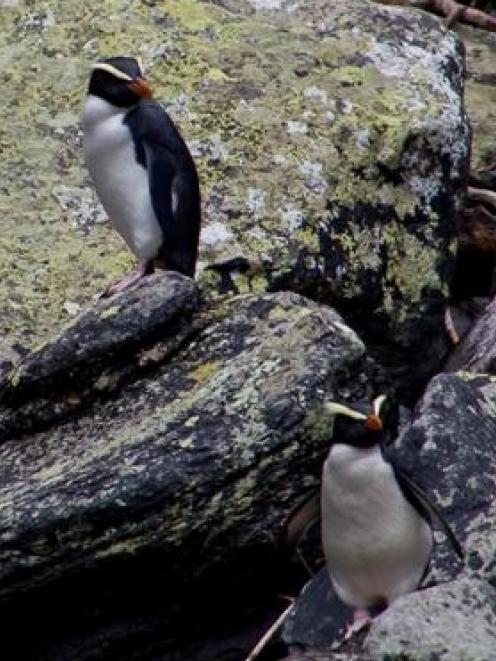 Fiordland crested penguins in Fiordland. Photo supplied.
Some of the rarest penguins in the world have been spotted in Milford Sound, having arrived for the nesting season.

The Fiordland crested penguins, or tawaki, were seen this week by Encounter Cruise nature guide Sara Walker, who said she was "thrilled" to see the birds back in the area.

"The tawaki are an icon of Fiordland and one of the rarest penguins in the world.

"They're making their homes in the aptly-named Penguin Cove and will most likely remain here until November, when their chicks will be ready to head out to sea.

"It's very exciting to spot them and to know how rare and special they are.

"It's always a highlight of our trips for visitors when we see them up close and personal in their natural environment."

The penguins were monogamous and often mated for life, although pairs separated when not breeding. Females return each year to the same beach in search of their mate.

Females lay two eggs by the end of August, which are then incubated for between 30 and 35 days.

Tawaki cannot raise more than one chick per season and the first egg is thought to be an "insurance policy" in case the second egg does not survive.

Chicks are brooded by the male, which goes without food for the first three weeks.

The chicks then form creches and are fed by both parents until they become independent, leaving the colony in late November or early December.