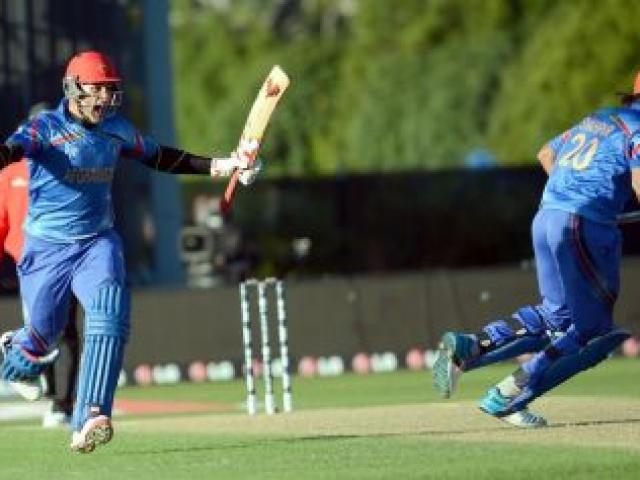 Afghanistan's Hamid Hassan (left) celebrates while Shapoor Zadran sets off on a victory dash after hitting the winning runs to seal a dramatic World Cup win against Scotland at the University Oval yesterday. Photo by Peter McIntosh.
Afghanistan's Shapoor Zadran treated us to one of the enduring images of the 2015 Cricket World Cup with a mad, emotionally charged 50m dash.

He had just clipped the ball off his pads for a boundary to seal a dramatic one-wicket win against Scotland at the University Oval and looked as if he might take flight as he set off.

He slumped to the ground at the end of his spirited sprint and was swamped by team-mate Hamid Hassan and sub Usman Ghani also joined the group hug.

The moment summed up one of the great comeback wins.

Never mind that this game was played between two Associate nations who are highly unlikely to progress beyond pool play, it was just a wonderful game played with compelling passion.

However, Shapoor had the honour of hitting the winning runs, it was a fighting knock of 96 from Samiullah Shenwari which got the Afghans back into the match following a swift collapse which had threatened to take the game away from them.

He got out in sight of victory but enjoyed Shapoor's run from the sideline.

''When we win we shouted. One shout but a big shout,'' Shenwari said.

''But then the coach come in and said calm down. It is just one match and still we have two more World Cup matches to win [to make the quarterfinals].''

Afghanistan's chase was full of calamity.

After a promising start of 85 for two, the Afghans lost the next five wickets for just 12 runs.

Afghan opener Nawroz Mangal had reached 1000 career ODI runs before he was bowled for seven, and Asghar Stanikzai spent just three deliveries at the crease.

Javed Ahmadi seized the initiative with a run-a-ball innings of 51. But Mohammad Nabi's departure and Afsar Zazai's duck left the innings teetering.

However, Shenwari, who had a life on 20, kept the faith. He left it until the 47th over to make his move, lofting Majid Haq for three sixes before holing out on the midwicket boundary.

The last pair of Shapoor and Hassan held their nerve. Earlier, they had played a key role with the ball.

Along with Dawlat Zadran, the trio enhanced their reputation as one of the most formidable bowling units in Associate cricket with an impressive display.

Together they accounted for eight wickets to help dismiss the Scots for 210.

Dawlat (three for 29) made the initial breakthrough with a ball which should have been dispatched to the boundary.

But the key wicket of Kyle Coetzer would have rocked the Scottish. Dawlat claimed a third when he nicked out Richie Berrington (25).

Matt Machan (31) and Preston Mommsen (23) staged some resistance with a partnership of 53 for the fourth wicket.

Machan was undone attacking the off spin of Nabi and moments later Mommsen got an edge, leaving Scotland 95 for five.

Haq (31) and Alasdair Evans (28) revived the flagging innings, adding 62 for the ninth wicket.

Evans brought up the team 200 with a blazing drive over extra cover.

''We are very disappointed,'' the Scottish captain Mommsen said.

''It is a game we should have won ... but regrettably we didn't have the killer punch.''

Shapoor finished with four for 38, but he will always be remembered for that glance and his celebration.