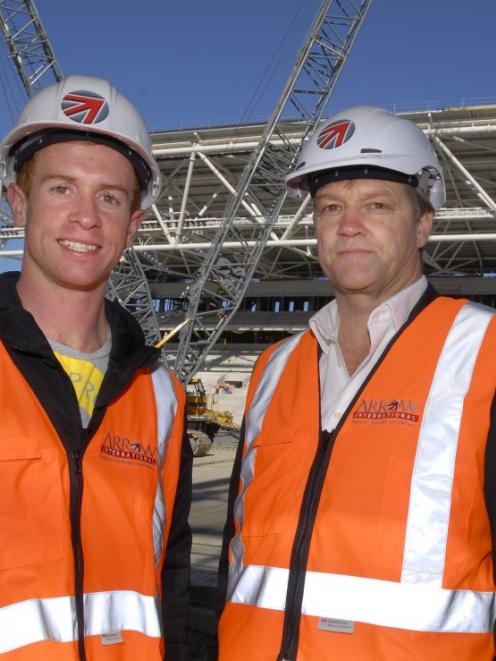 He also confirmed the new Forsyth Barr Stadium was definitely in the mix to host All Whites games.

Van Hattum is in Dunedin this weekend, with All Whites midfielder Aaron Clapham, to attend a couple of functions and the mini World Cup at the Oval today.

The former All Whites goalkeeper said the sport had to be realistic about what it wanted to achieve in the wake of New Zealand's unbeaten run at the World Cup.

"There is still that wave of emotion and excitement out there and we now have the task of having to keep that alive," Van Hattum said.

"This is not easy to do. New Zealanders are sporting mad but it needs to be topical for them. There always needs to be something around the corner, something to look forward to."

NZ Football has arranged friendly games against Paraguay and Honduras in October but Van Hattum said a competitive game against a serious opponent would come along perhaps once a year at best.

"We are not going to bring them home too often but when we do, we need to fill the stadium against the best teams.

"I'm not confident of getting a sellout in October. Our problem is people are going to be expecting November 14 [when the All Whites beat Bahrain in a World Cup qualifier last year] and the emotion of that. You've got to manage expectations."

Van Hattum visited the Forsyth Barr Stadium yesterday and said it would be a fantastic asset for Dunedin.

"It has every chance in the world of hosting an All Whites game. It is a possibility when everything is up and running."

He expected a full-strength All Whites team to turn out in October. "I'm confident of getting the players down. If you say Winston [Reid] can stay at home, then what about the others? What about Ryan [Nelsen]? Rory [Fallon]? [Shane] Smeltz? We owe it to the public to have our best team."

He said rugby in New Zealand had a distinct advantage over most other sports as the national body in effect controlled all the players.

"The public will turn out and will want to see them [All Whites stars] in the flesh. I'm hopeful we will get good crowds but a Tuesday night in Wellington is a big ask. It is disappointing we could not go to Christchurch. I hope we can get 25,000 in Auckland but then again it could rain."

Football let a golden opportunity go by in 1982 when it failed to capitalise on the All Whites reaching the World Cup for the first time, but Van Hattum said the world was different back then.

"The biggest difference was there was no professional football back then. Once you finished playing, you just went back to your job or went and got one.

"There are a whole lot of commercial opportunities now. The thing is . . . people did not know what they wanted back then."

A proper national league would undoubtedly help the profile of the sport, but costs outweighed that, he said. Establishing facilities for players of all ages was also a key.

He said the sport did not want to knock rugby off its perch, and just wanted credibility.

Van Hattum hoped the enthusiasm shown by New Zealanders for the football World Cup this year would carry across to rugby's showpiece event next year.