By Simon Henderson
0 Comments
A colourful container for candy has become much more for a local woman.

Blossom O’Neill is turning her collection of novelty Pez-themed candy dispensers into a mini museum that is gradually expanding across the walls of her bedroom.

The collection began in 2019 when she remembered owning a Melman the Giraffe — a character from the movie Madagascar — dispenser as a child.

She searched online to see if she could complete a set of dispenser characters from Madagascar.

To begin with her aim was just to complete the Madagascar set, but she soon discovered a community of collectors.

"So then I was like ‘oh this is quite cool’ so I just kept gradually collecting them."

She estimates her collection now totals more than 1500 Pez dispensers. 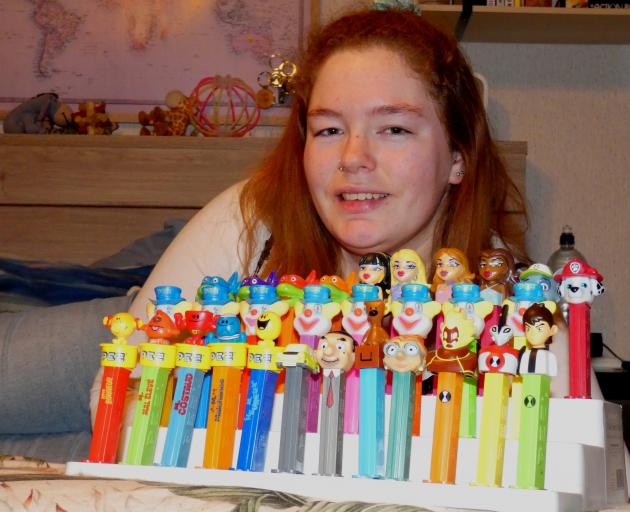 Blossom O’Neill, of Helensburgh, has a taste for Pez dispensers.PHOTO: SIMON HENDERSON

There were not many collectors in New Zealand and Miss O’Neill began sourcing her collection further afield, mostly from the United States.

The Covid-19 pandemic put a pause on her hobby, but a couple of months ago she began looking to expand her collection again.

From Mickey Mouse to Shrek, Batman to Buzz Lightyear, the collection was a journey into popular culture from the past 50 or so years.

From a simple candy container that could cost only a few dollars in a corner store, some hard-to-find dispensers were now worth up to $300 each.

Some sets had more value if they were unopened in original packaging, and defects could add to the value.

An example was an unopened package of Simba from The Lion King movie.

The dispenser was missing one ear, which when originally sold might have made it worthless, but for a collector this could add value as a rare anomaly.

There was a sweet taste of success for Miss O’Neill as she estimated she had more than doubled her investment and the collection could be worth over $2000.

Miss O’Neill had not finished collecting, despite sometimes finding it a challenge to store and display them all.

"It is quite a cool thing to collect."

Sometimes children contacted her through their parents asking to see the collection, she said.

But she has one confession to make.