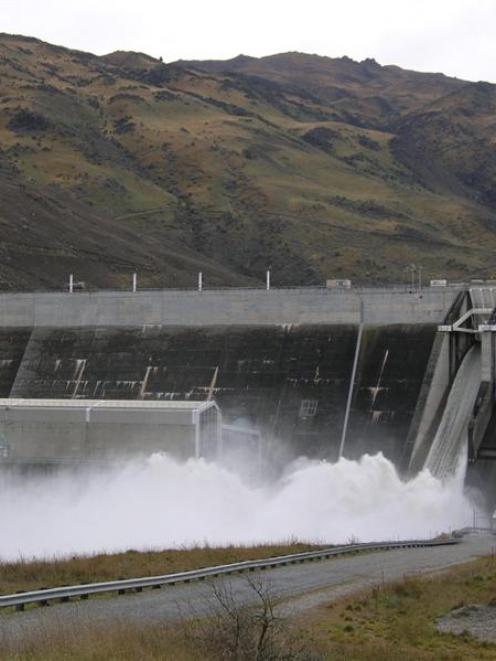 Spilling water at hydro dams has hurt Contact Energy's profit forecasts. Photo by Rosie Manins.
Contact Energy is expecting full-year underlying earnings after tax to fall by as much as a third.

This is because of lower-than-expected wholesale electricity prices.

"Our revised valuation is largely unchanged at $8.01 a share, as the financial impact of low wholesale prices is a one-off," he said.

Contact had endured an unprecedented period of bad news, he said.

While a positive re-rating was expected to occur, Mr Young did not believe it would happen soon.

"In light of low wholesale prices, the downgrade was not surprising.

"If there is a positive to come out of today's announcement, it is that the downgrade is largely due to wholesale prices and is a one-off event with minimal long-term implications," Mr Young said.

Contact managing director David Baldwin said Contact's 2009 full-year underlying earnings after tax were expected to come in at 30% to 33% less than the year to June 2008.

That was lower than expected and advised in January.

"The forecast as at January 2009 represented a mid-point of a range of outcomes," Mr Baldwin said.

Extremes in hydrology were reflected in low wholesale electricity prices.

This resulted in this financial year's ebitdaf (earnings before net interest expense, income tax, depreciation, amortisation, financial instruments and other significant items) being 20% to 22% less than last year.

In January, Contact said underlying earnings after tax for the 2009 financial year would be between 20% and 23% lower than the 2008 financial year.

Mr Baldwin said there had been extremely high hydro inflows in the South Island.

The flows, combined with lower electricity demand largely due to an unscheduled outage at the Tiwai Point aluminium smelter, caused hydro lakes to frequently spill water over the past three months.

This led to the low wholesale prices, limiting the requirement for thermal generation.

South Island hydro storage was at 136% of mean, and inflows during the past three months were at the top 16% of historical records.

The recent high inflows had resulted in the outlook for wholesale prices remaining low for the rest of the financial year.

Additionally, Contact did not expect a repeat this winter of the adverse impact it incurred last July and August: weather extremes combined with the unavailability of pole one in the direct current transmission system.