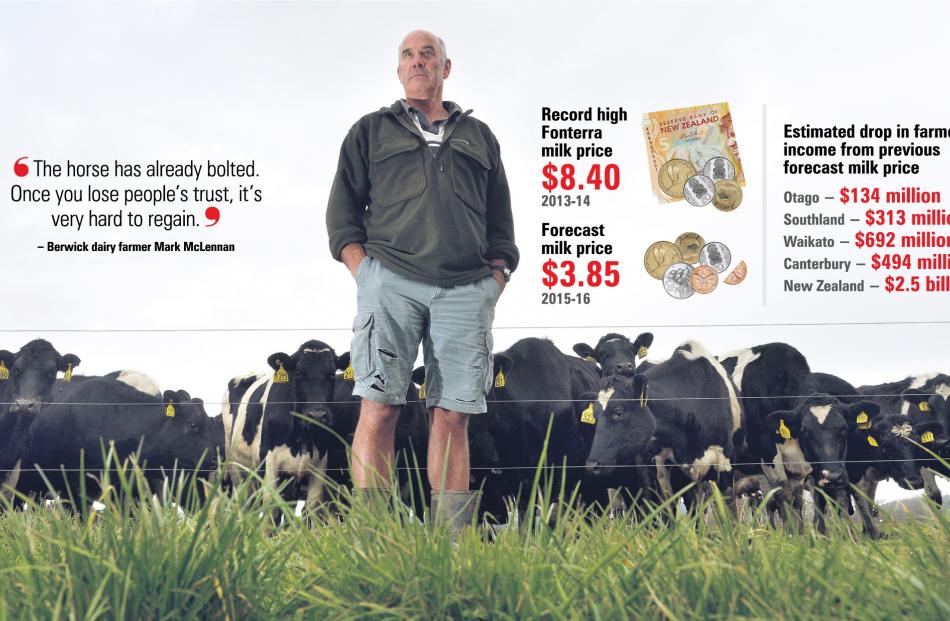 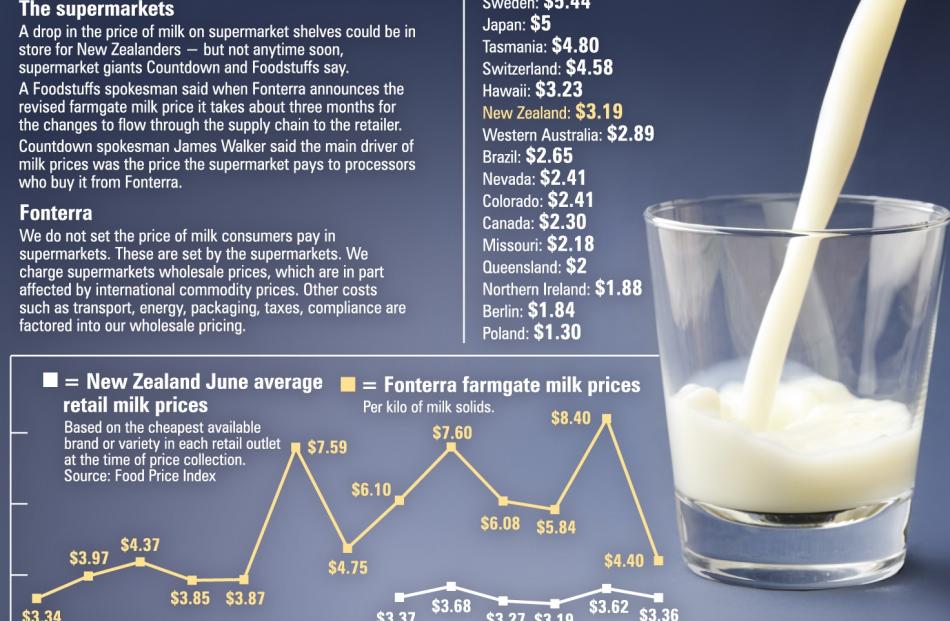 ''If it continues into next year, ... it's going to be ugly for a lot of people. There will be casualties eventually.''

That was the sobering response of Berwick dairy farmer Mark McLennan on a day dubbed ''Black Friday'' for the dairy industry, with Fonterra slashing its 2015-16 forecast price to $3.85 per kg of milk solids, the lowest figure since 2002.

DairyNZ's latest analysis showed an average farmer needed $5.40 per kg to break even.

It could not get much worse than not being able to meet the cost of production, Mr McLennan said.

The estimated drop in farmer income from the milk price revision down from $5.25 was $2.5billion nationally, or a further reduction of $150,000 for average dairy farm income this season, a $134million hit in Otago and $313million in Southland.

During such times of ''doom and gloom'', Mr McLennan was struggling to understand how Fonterra boss Theo Spierings could collect a $4.18million salary.

''I don't think many farmers can relate to that. To my way of thinking, one man is not worth that,'' he said.

He also believed the industry had led farmers ''up the garden path a bit'', not giving a true indication of what was coming.

He found it difficult to comprehend that people could be ''paid millions'' if they could not pick what was happening in the global scene.

While dairy prices ''would come back again'', there needed to be honesty about when, so farmers could structure their businesses accordingly.

Mr McLennan (53), a second-generation dairy farmer, and wife Vicki have been farming for 26 years, working their way up the ladder until they were able to buy their own land.

None of their four children want to be dairy farmers.

While comments were made that, as established farmers, they ''should be right'', that really meant nothing, Mr McLennan said.

He was tiring of what he called ''condescending comments from people that should know better'', including Prime Minister John Key.

The notion farmers were resilient, innovative and could get through challenging times ''doesn't pay the bills'', he said.

Acknowledging his stress levels were ''certainly getting up there'', Mr McLennan said for him, the fun had gone out of farming.

As well as dealing with weather and prices on a daily basis - ''that's what farmers do'' - there were increasing external pressures, including regional council and health and safety requirements.

''They are just chipping away at your heels all the time. Everyone is trying to do their best. This on top of it is making it very difficult,'' he said.

Fonterra's $8.40 a kg milk price in 2013-14 was ''well gone'' and unlikely to be repeated but, even at that high figure, he believed ''serious questions'' still should have been asked of the dairy giant.

He was frustrated about the lack of communication from Fonterra, saying it was almost ''like a secret society'' and only ''half information'' was provided to shareholders.

''The horse has already bolted. Once you lose people's trust, it's very hard to regain.

''You can't run a business through weak promises. You lose faith in what they've got to say, really,'' he said.

Farmers could not keep borrowing money ''just to stay afloat'' and he feared farmers could not make their businesses survive if low prices went into another year, unless they were extremely well capitalised and had very low debt, meaning they might be able to borrow.

Some hard decisions had to be made and every dollar counted when it came to costs.

Mr and Mrs McLennan always did monthly cashflows, so were well aware of their position, but those were being revised more regularly.

While all the rural sector would suffer from the dairy industry's woes, with ''absolutely nothing'' being spent, it would eventually filter through to urban New Zealand, he said.