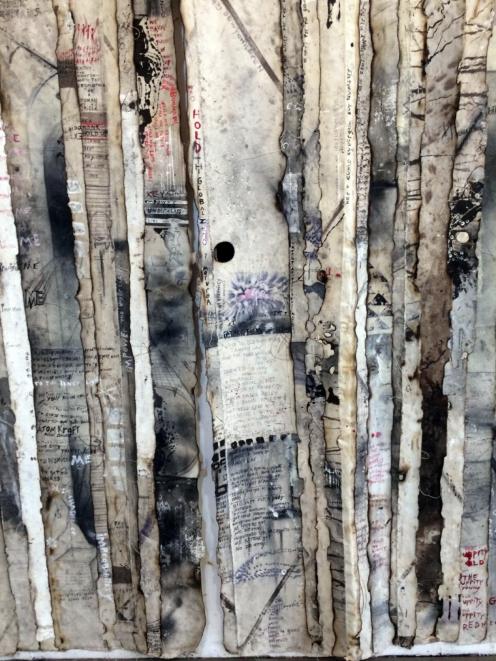 As Rebecca Fox wrote in her feature on James Robinson’s ‘‘Open Studio’’, the artist and New Zealand poet laureate David Eggleton have been responding formally to each other’s work for over a decade.

This particular exchange between the painterly and the poetic is a contemporary iteration of well-known historical creative partnerships in this country such as that of artist Ralph Hotere and poet Hone Tuwhare (to name one poet Hotere collaborated with).

Robinson’s collaborative response with Eggleton is centred on a large mural titled Edgeland Teleprompter Incantation, which runs the length of Robinson’s largest studio space. The mural’s title references the title of Eggleton’s long poem Teleprompter, which is included in his collection Edgeland (2018), while “incantation” describes both the rapid-fire syntax of Teleprompter and the long, slender, flesh-like strips of canvas of Robinson’s mural.

Excerpts of Eggleton’s poem have been written in ink or paint across the vertical and horizontal expanses and are accompanied by Robinson’s amalgamation of washes and graffiti-like arcana. The cumulative effect of these scorched strips of canvas is flayed flesh, which is a fitting response to the tension between the emptiness and excess of consumerism that Eggleton evokes in Teleprompter.

It is a difficult poem to materialise and embody as it too trades in a glut of words to convey its message, but Robinson’s flaying of the flesh-as-canvas captures both the excess and the hollowness between. 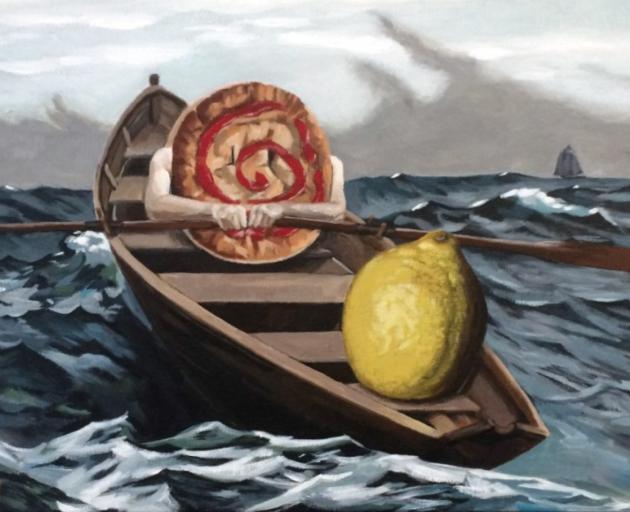 Two Poems of the Sea: Severed frae thee, can I survive, by Jon Chapman
“Here I give thanks”, Jon Chapman (Bellamy’s Gallery)

Have you not seen a pie with a twirl of tomato sauce row a lemon out to sea in a small boat? Or modernist painter Rita Angus, who for a period of time signed her paintings as “Rita Cook”, reimagined as Rita Chook?

In this work, Chapman has retained Angus/Cook’s piercing sidelong stare of her famous Self-portrait (1936-37), but transformed her face and neck into that of a chicken. The degree of word play and its transmutation into punning painted scenarios that characterise this exhibition should now be evident from this description of two of the six paintings on display.

In addition to revealing his skill across different painting styles — such as figurative (row boat) and hard-edge modernism (Rita) — Chapman has experimented with a medieval-style stacked land/sea/sky-scape in which a family of kiore (Polynesian rat) row a small boat towards a haven of birds endemic to Aotearoa.

The birds are stacked on or around trees in a way that echoes the formal division of the vertical plane into ocean, land and sky. From the mouth of each kiore issues a vertical scroll with the greeting “kia ora” inscribed in medieval script, which is somewhat chilling given the decimation of birds following its arrival.

In addition to the paintings, Chapman has singled out from the archive an advertisement from 1986 for saveloys, and created a monogram for a jersey: ‘‘Mighty Nutritious Mung Bean Mob’’.

“Garden of Purity” is an incredibly engaging and sensual compilation of interconnected video works that respond to a queer Coptic poem titled The Thunder: Perfect Mind (c. AD350). Written in the first person (I am), with many declarative phrases, the poem is a fascinating juxtaposition of opposing statements, such as “I am senseless and I am wise”.

The female speaker of the poem primarily negotiates binaries of love and hate, and Wellington-based artist Laura Duffy has manifested this dynamic through the subject of decaying food. The selection of decaying food carries both the implicit pleasure of food prior to decay and the disgust of putrescence.

In contemporary culture women in particular have been forced into a love-hate relationship with food and “body image” that can also cause shame, so decaying food is an apt visual embodiment. Duffy’s subversion and intervention has been to reanimate pleasure, sensuality and beauty in this process of decay.

In this series of works glistening organic, fleshy, visceral forms undulate, coagulate and dissolve as the camera variously tracks horizontally and vertically and partially rotates. Under a microscopic lens, amoeba-like bubbles pool, eddy and fizz, and in one sequence a lava path of honey envelopes a small forest of mould hyphae.

The poem’s juxtapositions of love-hate, pleasure-disgust are figurative enacted by forms that alternately swarm together and separate apart.