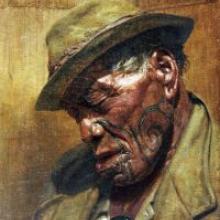 Goldie's portrait of Hori Pokai, which will be auctioned later this month. Photo from NZPA.
A well-illustrated look at the life of artist Patricia France.

PAINTING OUT THE PAST: The life and art of Patricia France Richard Donald
Longacre Press, pbk, $44.99

Patricia France died in 1995, having in later life built a successful career as a painter, mostly of women and girls and flowers, in a style all of her own.

It is far too early to attempt to measure her place in the New Zealand art continuum, and Richard Donald, author of Painting out the Past, wisely does not try.

Rather, he attempts to realise this little memoir's subtitle, "the life and art of Patricia France", and makes a commendable fist of it.

A retired endocrinologist, Donald's affection for his subject is far more dominant than any wish to scrutinise with scientific attention the details of the life of a woman who became such a magnet for a circle of Dunedin cultural figures in the two decades from 1975.

Her life before the 1960s might be suitably categorised as that of an impoverished member of what passed for "society" in Auckland before the nouveau riche took over, later that of a spinster required to care for other members of her family.

There followed a six-year interregnum when, on three occasions, she was admitted to the then Ashburn Hall suffering from depression.

But there she took up art therapy, and, it might be said, continued art therapy for the rest of her long life.

With more than 35 solo or group exhibitions - commencing at the age of 66 - and widely praised by the critics, she soon found her works popular with the buying public and taken seriously, usually a contradiction in this country.

From 1966 to her death, she lived in a villa on Highgate, through whose gate trudged a great many friends drawn into the enchantment of her sympathy, character, style and generosity.

Much of this is related by the author in the form of comments or quotations, even poems, by members of her circle.

This gives the narrative a warm tone, but also a rather distant, superficial one, especially where the artworks are concerned.

The book becomes a conversation - a charming consequence - but for readers such as myself, not personally knowing France and familiar only with a few of her paintings, there is a hunger for more detail and analysis.

I should have liked to read a great deal more from her diaries and letters, for example, although the latter are generously quoted.

I had one or two quibbles with matters left rather hanging in the text.

Still, as an effort at remembrance of an individual who clearly knew the art of fashioning friendships, and who was herself fully deserving of the affection she received, Painting out the Past is sufficient - a "subjective biography" indeed.

It is very well illustrated, with both photographs and paintings, and well-designed, but lacks an index.