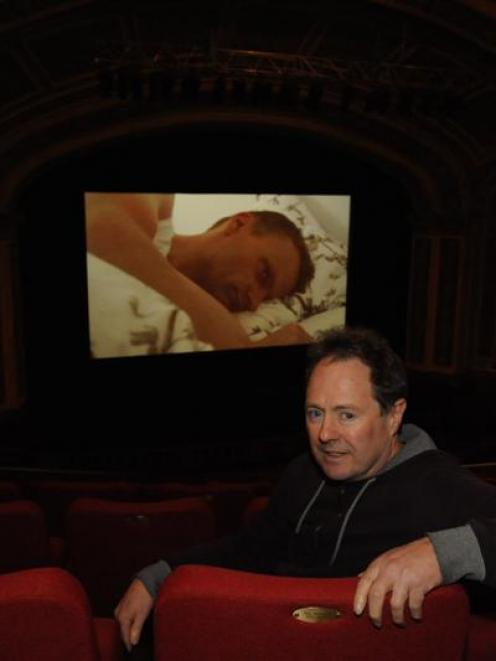 Photo by Linda Robertson.
From the humorous to the harrowing, the New Zealand 2012 International Film Festival offers plenty for everyone. At least, that's the aim, says director Bill Gosden.As a child growing up in Dunedin, Bill Gosden could often be found at one of the city's theatres, watching film

The director of the New Zealand International Film Festival still gets to indulge his passion, although he admits what started as an "intense hobby" and turned into a full-time job does have its fair share of stress.

"It never occurred to me that I'd end up doing what I am doing.

"Then this job opportunity came up and I guess I made the most of it," Gosden says of his move from Dunedin to Wellington in 1976 to take up a job with the New Zealand Film Service, before starting work with the Wellington Film Festival in 1979.

By 1984 he was running both the Wellington and Auckland film festivals, which also offered smaller programmes for provincial centres.

In fact, it is only relatively recently, in 2009, that several separately evolved festivals, including one in Dunedin, were consolidated into the single New Zealand International Film Festival, which runs in Dunedin from July 26-August 19.

"It's a real thrill for me to get to programme the Regent Theatre for 17 days of the year," Gosden says from his Wellington office.

"When I was a kid I would like nothing better than to sit in those fabulous old theatres, of which the Regent is really the only one remaining."

Gosden says he hopes to remain in charge of the film festival "as long as people keep going to movies".

"We are completely dependent on audiences to support us.

"There is a little bit of grant money, but unlike any other international film festival, we are 90% dependent on previous years' ticket sales to keep us going.

"Really, the overarching idea is to cater to a broad audience.

"Sometimes a film will arrive early in the piece and seem an obvious contender.

"For example, clearly there would be an audience interested in seeing a documentary about Bob Marley - and it's a terrific film," Gosden says of director Kevin Macdonald's Marley.

"It is quite an extensive and in-depth look at the guy.

"It's done by the guy who made Touching The Void.

"He's a very experienced and accomplished documentary-maker - as opposed to being a Bob Marley fan - and I think the film is all the better for that."

Once again, real life provides a solid backbone to the festival. Or, as Gosden says: "The opportunity to get documentaries on to the big screen is irresistible.

"Some of these are spectacular," he says, listing Chasing Ice and rhapsodic nature film Vivan las Antipodas! as two of his personal favourites.

In Chasing Ice, photographer James Balog details his painstaking Extreme Ice Survey project that involved capturing time-lapse photographs of numerous glaciers over several years, assembling "all the evidence anyone should ever need of the radical worldwide impact of climate change".

In contrast, Vivan las Antipodas! mixes science, art and humour in Viktor Kossakovsky's film depicting pairs of places that are each other's antipodes (the premise: if you dug a hole straight through the central core of the planet, where would you come out?).

And there's no shortage of New Zealand documentaries, either, Gosden points out.

"We were astounded by the number of New Zealand documentaries.

"Every week we'd get a call from somebody.

And they are all so good.

"Some of them have got very clear agendas, particularly The Last Ocean, which is part of the campaign to raise awareness about the exploitation of the Ross Sea.

"It is by Peter Young, a very accomplished Christchurch cameraman who has made his first feature.

"Of considerable relevance to Dunedin audiences is Tatarakihi: the children of Parihaka, Paora Joseph's film about the "journey of memory" taken by a group of Parihaka children who travel to the South Island, following in the footsteps of their male ancestors who were transported south after the Taranaki land confiscations of the 1860s."

Among the places the children visit are caves at Andersons Bay, where the Parihaka men were imprisoned.

The prisoners were forced to labour on buildings, roads and embankments.

"They were basically slave labour, used to build the infrastructure of the city," Gosden says.

Equally harrowing, Bully is a film Gosden hopes parents and teachers will see, although he says he understands a lot of people go to film festivals for purely recreational purposes.

"A film such as Bully might not be their favoured way of spending a Saturday afternoon."