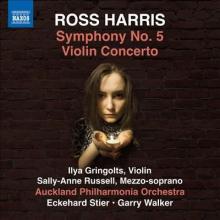 Ross Harris, one of the famous New Zealand composers of our day, has won many honours including a QSM in 1988 and a citation from the NZ Composers Association for services to music.

A freelance composer since 2014, he has had residencies with Auckland Philharmonia and Victoria University orchestras.

The Auckland Philharmonia performs this recent music under Eckehard Stier (symphony) and Garry Walker (concerto). Harris enjoys a close affinity with this orchestra:  it premiered two earlier symphonies, his cello and a viola concerto.  Performances here are world premiere recordings.

Symphony No.5 was written in 2013 and recorded the same year.

Its effective format (three orchestral movements spaced with three with singer) was inspired by a poem by Panni Palasti about savagery and sorrow in the siege of Budapest during World War 2.

The music begins in a tentative, exploratory way but becomes compelling, especially the noisy first Scherzo that conveys the noise and cruelty of war in a manner reminiscent of Shostakovich.

The contrast between this and quiet introspection and sorrow in the poetry beautifully sung about a little girl in hiding,  nursed in tender musical sounds, works well.

It is a 23-minute work in five short parts.

The soloist is a talented Russian who has performed with many orchestras and made recordings on several labels.

This is an interesting work that begins with some explosive pyrotechnics from violin and orchestra but settles down to convey an abstract picture of a strange but enticing landscape.