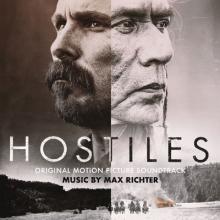 This is an original motion picture soundtrack comprising 19 brief tracks. It was composed for the 2017 movie Hostiles directed by Scott Cooper, which I understand from The Guardian was an end-of-an-era Western, set in 1892, that is a "tough but tender tale of blood and dust" said to be populated by characters who are tough, silent people. It gives Max Richter the scope to wring "mournful song from troubled landscapes".

The film's opening D.H. Lawrence quote "the essential American soul is hard, isolate, stoic, and a killer" sets the scene for plenty of mayhem in the film, between Apache and Comanche people and settlers in New Mexico with territorial wars - i.e. cowboys and Indians stuff with dark clouds hanging over the story.

Richter, the German-born British composer, provides a brooding score that suits this landscape with its pain and torment, moving only slowly to some relief. The dark opening piece The First Scalp is the longest and there is only one vocal track, Ryan Bingham's How Shall A Sparrow Fly, with a mandolin accompaniment. Richter enchants by his use of Turkish musician Gorkem Sen's extraordinary instrument, the yaybahar. It uses springs, strings and membranes to create abstract landscapes that Richter has then orchestrated and manipulated carefully. Cellos and violins also help in a recurrent silent-scream visual motif. Individual themes were also created to accompany the major characters in the film. The soundtrack is minimalist but not as extreme as I expected - yet obviously fit for purpose as the compelling background of a movie.