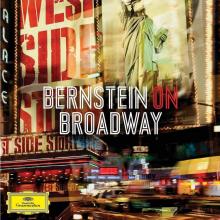 Leonard Bernstein must not be under-rated as an important composer and conductor of the 20th century. The US musician was born in 1918 and his centennial is being celebrated this year.

(He died in 1990.) German label Deutsche Grammophon is planning to release a number of his works, this disc being an excellent programme of most popular and best-loved numbers from three of his Broadway shows: West Side Story, On The Town and Candide.

These original recordings must have been remastered as the sound is certainly now fresh and splendid. With the LSO performing in two of the shows, conducted by Bernstein himself, quality was guaranteed. I was not well acquainted with Candide as a musical before but very impressed now to hear six of its numbers  — truly a "visionary work with a dazzling score" as the CD proclaims. Michael Tilson Thomas conducts the LSO for the five rollicking songs from On The Town.

New Zealanders will be delighted to hear the diva Kiri Te Kanawa in her prime, singing hits from West Side Story, where her performance is absolutely beautiful. Interviewed by the New York Times during the recording sessions, Bernstein noted how difficult it is to cast that Broadway show and explained he decided to "go for sound" on this recording. Dame Kiri might seem a surprising soprano to cast as Maria on stage, yet there is no doubt that the beauty of her voice here, its combination of richness, delicacy and purity, consistently brings out the musical strengths of Bernstein’s inspiration. It is a sparkling performance.

Verdict: This set will be popular with a wide audience.