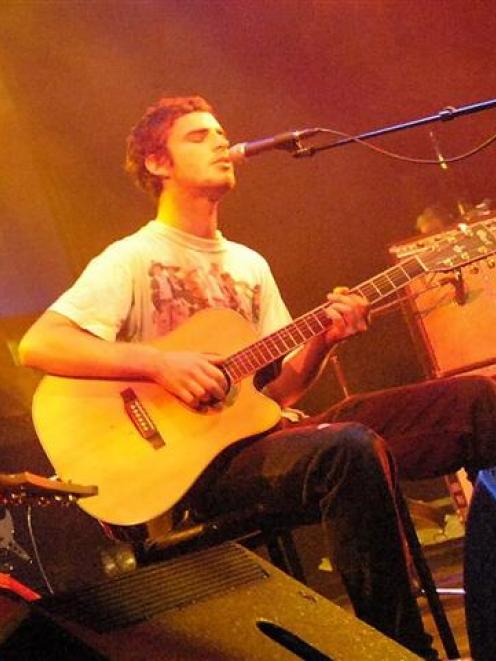 Tom Young plays at the Resound concert in the Regent Theatre in 2007. Photo by Craig Baxter.
A new album by former Dunedin musician Tom Young and his sidekick Sarah Gautier will soon be backed up by a tour of the country.

Young has been playing as Freddy Fudd Pucker since about 2006, and was joined by Gautier, an accordion player and vocalist of Texan extraction, a couple of years ago.

For the past several years, Young has been based in Melbourne, although the band has toured extensively in the US.

The new album is called The Priest, the Fly & the Flea, and follows last year's One for the Wonderwheel. It is FFP's fourth full-length album.

Young says it's a "collection of 13 dark folk songs sprinkled with cynical humour and intricate melodies".

In February the duo played at the Camp A Low Hum festival in New Zealand before returning to Melbourne. June sees them embark on a three-week tour of Aotearoa, with Australian solo act Danny Cisco.

They play the Dux de Lux, Queenstown, on June 16, before dates at the Crown Hotel, Dunedin on June 18, and The Church, Dunedin, on June 25.

Freddy Fudd Pucker also plans to tour the US with The Outsiders later this year.


• Open slather
The Church, in Dundas St, Dunedin, is also holding an open-mike night on Saturday.

Due to the late cancellation of another event, the venue's proprietors contacted Mike Jenkins, who had made inquiries about setting up an "open stage" at the venue.

"The first event will be put together very quickly and hopefully some songwriters will hear about it in time to be involved. I would like to make this a regular event so we will see what will happen on Saturday," Jenkins says.

"Most towns have open-mike venues, and the best of them draw musicians, songwriters and poets together. I have seen some awesome artists in these venues."


• Heads up
New Zealand band Head Like a Hole is releasing its second single since re-forming, Glory Glory, which follows earlier effort Swagger of Thieves. Glory Glory is available online. You can have a listen on Facebook.

The band, which now styles itself as the "mavericks of New Zealand rock", say it is leading up to a full-length album due for release on July 1. A nationwide tour is planned for August.

Head Like a Hole have joined the millions on the social media site Facebook, and are offering listens of the new single.


• As the crowe flies
Wellington act Mercury Crowe has released a video postcard for its latest single Ride.

Filmed in Whangapoua on the Coromandel Coast, the track in fact dates from 2007.

"Ride is a really fun video which doesn't take itself too seriously," said Mercury Crowe drummer Nick George. "It's The Beach meets Woodstock."

Ride was directed by Luke Robinson, who works on TV series Spartacus.

It is screening on Mercury Crowe's Youtube, Facebook and MySpace pages. The single is available on iTunes.