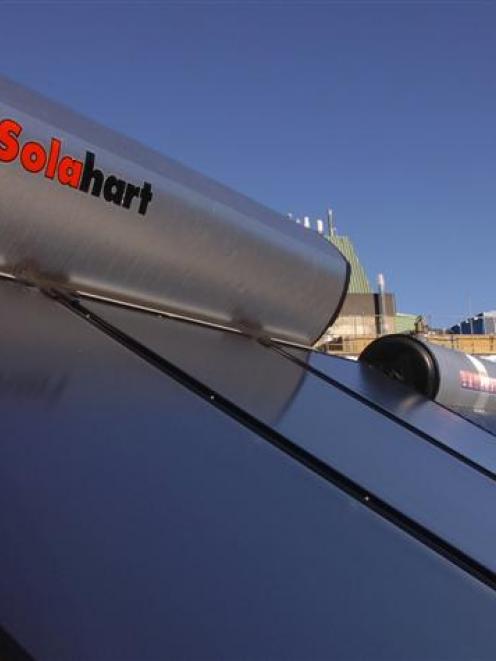 Associate Prof Bob Lloyd, who heads the University of Otago's energy studies programme, inspects the solar panels atop the Science 3 building which are used by staff and students for research purposes. Photo by Peter McIntosh.
It's official. Dunedin is the worst place in New Zealand in which to take advantage of free heat from the sun. Our solar radiation figures fall way below North Island and Central Otago urban centres, although there is some consolation - we rate better than Scott Base in Antarctic. So is it worth installing a solar hot water system in Dunedin? Reporter Allison Rudd investigates.

When an energy expert decides not to install solar water heating in his Dunedin home, it should be enough to set off alarm bells. Is installing a solar system a sensible idea for any city resident?

Even though he selected a water-heating heat pump over solar energy, Associate Prof Bob Lloyd says yes - provided householders get the best advice, use installers who knows what they are doing, buy the most appropriate system, have the right hot water cylinder and put their collector panels in the right place.

It would help if systems cost less too, he said.

"It's not rocket science. If a solar system works and is cheaper, people will go for it."

Prof Lloyd moved to Dunedin in 2003 to head the University of Otago's energy management programme.

About 40 undergraduate and postgraduate students participate in the programme, which has an emphasis on studying and researching renewable energy sources such as wind power and solar energy.

He says solar systems are energy-efficient, kind to the environment and reduce households' reliance on electricity. If correctly installed, they also have the potential to provide about 40% of the hot water requirements of a family of four, thus saving on electricity costs.

But they have drawbacks. Aside from the cost - between $5000 and $10,000, including a hot water cylinder - their efficiency in Dunedin can be seriously reduced by the city's hills, shaded areas and low solar radiation rates. There are no such problems in other parts of Otago, where solar radiation rates rank with the country's best.

An estimated 22,500 of New Zealand's 1.4 million households have solar water heating. Interest is growing, with about 2000 systems being installed annually.

The low uptake is part of the problem, Prof Lloyd says. If more people installed systems there would be more information available, and systems would cost less.

"The government is trying to encourage a shift in thinking. There is a proposal for Housing New Zealand to install solar systems in all 50,000 state houses. If that happened it would drive the cost of systems down, because of the volume of systems which would be sold."

Recent research from Branz, the Building Research Association of New Zealand, confirms the efficiency of the solar heating systems it studied was not brilliant.

The type of system selected, the placement of the panels, and the management of boost elements in the hot water cylinders were all critical factors in how well a system would perform.

They examined the systems' installation and performance, and talked to property owners to see whether their expectations had been met.

On average, solar systems provided 38% of householders' hot water, with evacuated tube systems performing much more efficiently than flat panels, their report showed. However, there was a wide range in performance results.

About a quarter of households gained more than 40% of their hot water needs from solar energy, and 21% of households gained only 26%. In most cases where systems were performing poorly, the problems was due to under-insulated hot water cylinders which allowed heat to escape, or from boost elements in the cylinders which kicked too soon and did not give the sun time to do its job.

It is common sense collector plates need to face due north, or as close to north as possible, so they can catch every ray of sunshine going.

The report found the angle of the panels was also important. Most were installed on the roof, at the same angle as the roof. However, the research found systems perform better when panels are placed at a steeper angle, particularly in winter when the sun is lower in the sky.

Control of the boost element was also critical, the report said.

Standard cylinders have an element at the bottom which heats the water. Hot water is drawn from the top of the cylinder and cold water flows in below to replace it. If the water temperature drops, the element will automatically switch on.

Cylinders designed for solar systems have an element half-way up or at the top to give the sun time to do its job before the boost element kicks in. Among several recommendations in the Branz report are. -

• Collector plates should be installed at an angle at least equal to the latitude of the site.

• Fitting solar heating to cylinders with bottom boost elements should not be allowed.

• Additional insulation for all cylinders.

• Checks should be made by the installer once a system is running to ensure it is working to specifications.

• Control panels should be fitted with an audible alarm to alert property owners to operational faults.

• Homeowners should be given more information about the need to check their systems, and how to tell if their systems are underperforming.

Ian Buchan is a pioneer of alternative energy systems in Dunedin, having operated his company, Power Options New Zealand Ltd, for 11 years. He has read the Branz report, and says he is not surprised the systems it examined were not performing brilliantly.

"Most of the systems they looked at are the old type. Technology has improved so much in the past few years. . . I am sure the results would be different if they did the research again."

Mr Buchan and his wife Carol live on a Macandrew Bay lifestyle block in a house almost entirely heated and powered by alternative energy. They generate electricity using a wind turbine, heat their house using a log fire, and heat their water using a wetback system from the log fire and solar energy.

They have a connection to the national electricity grid - just in case.

He says it was not until he installed newer-style evacuated tube solar panels at his own home three years ago that his system performed adequately.

"I'd say evacuated tube panels are essential, and you must have a proper controller, so the cylinder boost element does not switch on too soon. I'd say having the proper controller goes 50% of the way to having an efficient system."

Mr Buchan has been installing solar systems for about three and a-half years, and estimates he has installed more than 250. "All but one" of his customers was happy, he said, and the one who was not was getting teething problems sorted out.

Householders who had had their systems for at least a year were seeing a difference in their power bills, he said, although it was difficult to quantify savings exactly.

Some families said they were saving $100 a month. People who knew about solar systems said that amount was unachievable, but his customers said it was.

Mr Buchan believes the saving is more than the $30-$37 a month estimated by the Energy Efficiency and Conservation Authority (Eeca).

Its calculation it would 10 years to 13 years to recoup the expense of installing a system was too conservative. He believed the break-even point would be reached in about seven years.

"If you are building a new house, or if you live in a really sunny place like Gisborne, Nelson or Central Otago, you would be nuts not to do it."

What is solar water heating? Using the sun to heat the water you use in your home.

How does it work? Water flows either via a pump or by natural convection through a solar panel which is placed in a sunny spot outside your home, usually on the roof. The sun's energy heats the water. Hot water is stored in an insulated cylinder until needed.

Can I use my existing hot water cylinder? Ideally no, as the boost element and thermostat is usually at the bottom of the cylinder, close to the incoming cold water, and this will cause the element to turn on when you use any hot water and will not give the sun time to do its job. Cylinders designed to be used with solar systems have their element half-way up the cylinder or at the top. In some cases you can add a timing device to your existing cylinder to ensure the boost element does not switch on too soon.

Will the sun heat enough water for a family? No. A solar heating system should provide about 75% of the hot water used by a family of four during the summer, and 25%-45% in the winter. To ensure an adequate year-round supply, households will still need a cylinder with a boost element.

Does solar water heating suit everyone? No. If you live in a shady house or have no north-facing roof areas or grounds, it may not be cost-effective to install a system. How much will I have to pay for solar water heating? Between $5000 and $8000, depending on whether you install a new cylinder.

Will I save money? Yes, over time. Your electricity bills should reduce by $350-$450 a year, meaning it will take 10-13 years to pay off the installation costs (not including the cost of a new hot water cylinder). Annual savings are expected to increase as electricity and gas prices rise.

Can I get financial help to install a system? Possibly. The government, via the Energy Efficiency and Conservation Authority (Eeca), is offering $1000 to people who install approved systems. (see next fact list)

Are there other benefits to solar heating? Yes. Solar radiation is a free, non-polluting and renewable energy source. Solar systems can supply hot water in times of electricity shortages.

- A grant of $1000 is available towards the cost of installing a solar water heating system.

- Grants are government-funded via the Energy Efficiency and Conservation Authority (Eeca).

- Applications can be made until the end of May next year, although the scheme is likely to continue after that.

- Grants are paid directly to you.

More information is available by visiting www.energywise.govt.nz/solar or by calling 0800-762-7837.