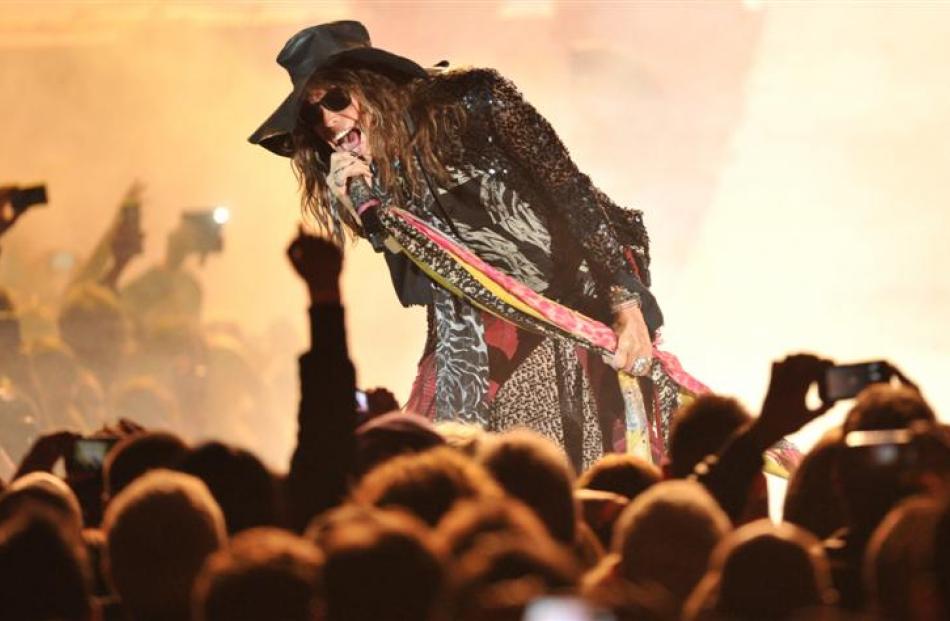 A spaceship from the 1970s called Aerosmith berthed in Dunedin last night.

More than 20,000 people descended on Forsyth Barr Stadium to herald the arrival of America's biggest rock and roll band.

On their New Zealand debut, the Rock and Roll Hall of famers delivered a 90-minute silver-spangled lighting spectacular driven by veteran masters of rock.

The stage was a hybrid of a spaceship and a guitar, which lead vocalists Steven Tyler and Joe Perry explored to its full extent.

Tyler even threw his jacket into the crowd during Living on the Edge.

Aerosmith has sold more than 150 million albums since it formed in 1971.

Australian band Wolfmother set the stage with its penultimate performance before it disbands after its final gig in its Melbourne hometown on Sunday.

The stage, which extended 20m into the crowd, looked like a hybrid of a spaceship and a guitar.

After opening with Love In An Elevator, Toys in the Attic and Jaded Aerosmith dived into its legacy of hits.

However, not everyone enjoyed the experience.

Concert-goer Rebecca Hill, of Dunedin, said she and her husband left after less than 90 minutes.

She said she was ''shocked'' to see people openly smoking both marijuana and cigarettes. They had arrived just before 9pm.

Police closed the bars about 9.30pm because people were ''so drunk'', she said.

On the Stadium's Facebook page, comments suggest a mixed experience for fans.

''Stunning concert! Really enjoyed it. Aerosmith were awesome. sound was fantastic where we were. Keep them coming well done!!!!'' wrote Liz Evans.

However, Andrew Jennings found the sound disappointing: ''Walked out on concert as sound was crap. $200 a ticket wasted! Thought you had sorted the sound!''

Several concertgoers also expressed their anger at the bars being closed before the concert ended.

Senior Sergeant Steve Aitken, contacted last night before the concert finished, said he had heard of no major issues, and police had not asked for backup at any stage.

Police had only arrested one person, a 51-year-old Christchurch man, who was taken into custody. He was likely to receive a pre-charge warning for ''drunk and disorderly'' behaviour.

The Dunedin concert was part of the third leg of Aerosmith's ''Global Warming Tour'' to promote the band's 15th studio album, Music From Another Dimension!, which was released in November.