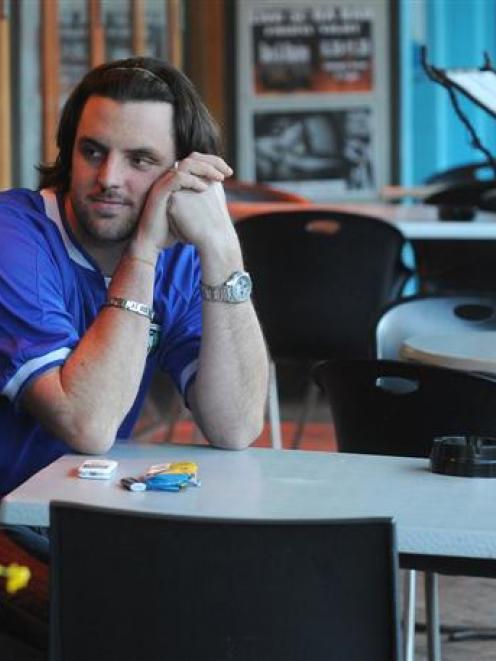 But the moves to keep the city's footpaths clear for the whole community's use was greeted with scepticism by some of those who might be affected by the revised policy.

Smoking outdoors is also in the council's sights, with a proposal to make all outdoors seating areas smoke-free also included in the policy, thrashed out by Crs Kate Wilson, Teresa Stevenson and Fliss Butcher yesterday and to be drafted by staff by early next week.

Cr Wilson, chairwoman of the subcommittee considering the policy revision, said the inclusion of a smoke-free clause depended on the result of a legal opinion being sought by the council. 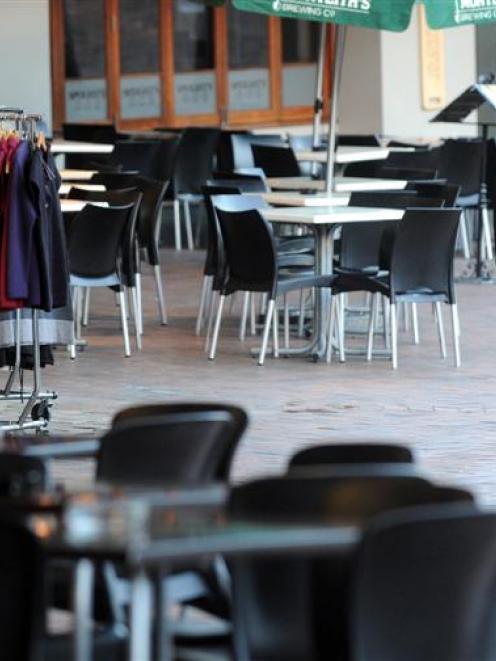 Racks of clothing like this one outside a shop in the Octagon, Dunedin, might be prohibited in a revised council policy on the commercial use of footpaths. Photo by Craig Baxter.
There were also questions about the subcommittee's ability to impose such a clause, as it went beyond the commercial use of footpaths, but submitters on the policy had raised concerns about smoking-related mess and smoking around food and drink, so it was to be tentatively included until further information was received.

Second-hand trader Neville Herd, of Arkwright Traders, who displays furniture outside this South Dunedin stores, said the public should decide what was appropriate.

He also believed there should be a tiered system in place, determining what was allowed on the footpath, depending on how wide it was outside a business.

Racks of clothing like this one outside a shop in the Octagon, Dunedin, might be prohibited in a revised council policy on the commercial use of footpaths. Photo by Craig Baxter.
"At the end of the day, we are only a small business. We are only trying to make a living and by displaying stuff outside, it catches the eye of the public. We probably sell 75% of our stock from outside."

Seriously Twisted owner Linzi Irving said "sterility and legislation is the choice they [the council] are making".

Her business displays several racks of clothing outside its Octagon store.

"I think policies like that limit the buzz and the excitement of any town."

Hospitality worker, and smoker, Aisling McKenzie said the idea of banning smoking at seats was "a bit ridiculous".

"Where would they want us to go?"

Fellow hospitality worker, and smoker, Kieran Goodwin believed it would be difficult to police, especially outside bars at weekends, as customers wanted to drink as they smoked.

The Terrace bar owner John MacDonald, who had not heard of the most recent changes, said it sounded as though there could be some practicality issues with the new proposals, especially around the smoking ban.

Otago Chamber of Commerce chief executive John Christie said the proposals were very bold and it was frustrating the council did not include them in the original extensive consultation on the issue.

However, given the substantive nature of the proposals it was good the council was opening them up for public consultation again, Mr Christie said.

The revision of the policy was the most major since it was introduced in 2005, and the revised draft policy, following a round of public consultation, would more clearly define what businesses could and could not do on Dunedin's public footpaths, Cr Wilson said.

It would need to be signed off by the council's planning and environment committee in late July before it went to the public again, but as it stood yesterday, the revised policy would prohibit the use of portable advertising signs, except where a business did not have a street-level frontage.

Even then, the preference would be for an advertising flag or banner, attached to a building at a point above 1.8m from the ground.

Shops in malls would be considered to have street frontages.

It would also include (to be decided by the planning and environment committee) either a total ban on the display of goods on footpaths, or displays being restricted to an area of 1m by 2.5m outside a shop.

Businesses with permits can now display goods in an area 600mm out from their shop walls, all along their shop fronts, which is common practice for some second-hand, clothing, florist and bicycle stores.

The revised policy would include a requirement for there always to be a clear passage of at least 1.2m on footpaths, with no signs or goods to be displayed on narrower footpaths.

Without limits on wider footpaths, displays could potentially become massive and untidy, said Cr Butcher, who was in favour of banning them all together.

"At least if you challenge them by limiting them, they're going to think better."

Written or etched commercial advertising on footpath surfaces would also be banned under the revised policy.

Other significant changes included requirements for businesses to remove chairs and tables on the footpath when there were crowding issues and restrictions on the size and placement of newspaper and advertising boxes and planter boxes.

Pedestrian corridors would have to be under verandas, except where council permitted an exception, which could affect the current placement of some tables and chairs outside bars in the Octagon, and the colour of screens partitioning premises would be broadened from black to a palette yet to be determined.

Before the July planning and environment committee meeting Cr Wilson intended to take the draft revised policy to the Chamber of Commerce and other key submitters from the first round of public consultation, which could help shape the policy that ended up before the committee, she said.

"The intention is this is what we think is best for the city."

If the outcome of consultation was that people were overwhelmingly against the changes proposed, they would have to take that into consideration, Cr Butcher said.