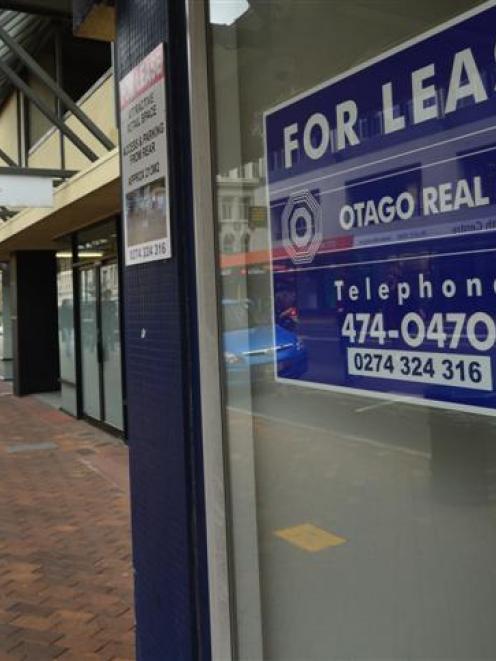 Is Dunedin's economy circling the drain? Or is it poised at the dawn of a new era, tapping into the riches of China, tourism and investment in renewable energy technology? Reporter Chris Morris asks Dunedin's mayoral candidates.

The ''for lease'' signs are becoming part of the furniture in the shop fronts of some Dunedin streets.

They sit forlornly in empty windows that reflect only the images of shoppers walking by without stopping.

But look closer and those otherwise empty windows might also reflect the worried looks of Dunedin's mayoral candidates.

Most of the contenders have identified the city's economy as a serious concern, while criticising incumbent Mayor Dave Cull and his council for failing to do enough to protect or create jobs.

And the promises to do better are flowing, including pledges to sell the stadium, extend the Dunedin airport runway and roll out the red carpet for oil companies- all in the name of economic development.

But it is not just the city's small businesses that are hurting - some of the city's biggest, brightest and oldest employers have also found themselves on the ropes in recent years.

Fisher and Paykel shocked everyone with the closure of its Mosgiel manufacturing plant, beginning in 2008, which cost 430 jobs.

Since then, the city's long-established Hillside engineering workshop has also gone, taking another 90 skilled manufacturing jobs with it, last year.

Delta - a Dunedin City Council-owned infrastructure company - has followed suit, with the last of nearly 150 jobs scheduled to be cut by January, including 38 in Dunedin.

And New Zealand Post announced earlier this year it planned to close its Dunedin mail centre, with the loss of 73 jobs in the city.

Then, of course, there is Invermay - one of the jewels in the crown of Dunedin's research sector, which now faces a dramatic downsizing with the loss of about 80 jobs from 2016.

The bottom line is found in statistics which show unemployment has jumped from 4.6% to 6.3% across Otago in the year to June.

That gave Otago the highest unemployment rate in the South Island.

The same is true in the public sector, where 250 job losses have been lost across Otago since 2008, placing the province second only to Wellington (with 499 job losses) for the period.

The blows have triggered anger and frustration in the South, as Mr Cull accused the Government of ignoring regional development while the rest of the South Island was ''cannibalised'' to rebuild Christchurch.

Economic Development Minister Steven Joyce has rejected the claim while cautioning against ''talking down'' the Dunedin economy ''when there are any number of companies growing in the city''.

And there are reasons for optimism, including developing economic links with China, driven in part by the council's new economic development strategy, and the success of companies in the city's technology sector.

That included accepting the days of heavy industry were behind Dunedin, and the future required a transition to new high-tech businesses in a knowledge-based economy, he believed.

''We are not going to be a major heavy manufacturing centre ever again ...

so it's really important to build the kind of businesses, and create the kind of jobs, that will give us the ability to pay our way in the future.''

The city's economic development strategy was the most significant initiative of the last three years designed to drive that transition, and the next decade, at least, would be about implementation, he said.

Attracting talented young people would be a key part of that drive, and would require continued investment in other parts of the city, he believed.

''You have got to create the kind of city they want. You are not going to attract 21st-century young people to a 19th-century city.

''All sorts of things come into that, including cycleways.''

He conceded his own efforts to save Hillside had failed, but pointed to the expansion of Fisher and Paykel's Dunedin-based design centre - under new Chinese owner Haier - as a significant success story.

However, most of Mr Cull's rivals insist he and his council have failed to deliver.

Andrew Whiley said the city's economic malaise was ''a major issue'', and the council appeared reactive, not proactive, on Invermay.

Dunedin offered many benefits for a new or relocating business, such as short commutes or cheap office space, but the council was not doing enough to promote that.

''They haven't followed through on their talk,'' he said.

Mr Whiley wanted more information made available to attract businesses, by advertising on the council website and on council-owned buildings in other cities.

The council did not seem to be ''in the mood'' to encourage job creation by cutting red tape, or presenting a welcoming face to investors such as Shell, Anadarko or those behind the proposed $100 million waterfront hotel.

''I don't know what they have been doing, but it isn't enough,'' she said.

Mrs Calvert pledged to survey the business sector, through the Otago Chamber of Commerce and other sector groups, to find out what had to change to encourage job creation.

Cr Lee Vandervis said the city's economy was ''dire, with only patches of hope'', and its reliance on government-funded institutions such as the university, while facing ''major'' debt interest costs, created a ''vulnerable'' future.

The DCC and Otago Regional Council were both spending too much money ''getting in the way of development'', and a unitary council was needed to cut departments, regulations and compliance costs and ease the burden on businesses.

The council should also drop commercial rates differentials, charge for services at cost price, cut spending on ''pet projects'', and invest in other projects, like an airport runway extension and cheap public transport, he said.

''You can not create real jobs unless you first create a business-friendly and attractive environment with equal opportunities for start-ups.''

He also wanted to promote Dunedin by focusing on famous figures and the city's arts and culture scene, and pledged to ''embarrass'' Wellington into returning some government departments to Dunedin.

Pete George, of Your Dunedin, said the economic situation was ''quite concerning'' and the council needed to do more, but did not seem to be getting ''traction'' on the economy.

''It's hard to know whether we can do anything about it, but we always seem to be too late and reacting,'' he said.

He was pushing for a consortium of Dunedin businesses to bid for a slice of the Inland Revenue Department's major IT upgrade and also vowed to improve communication between the council and groups like the Otago Chamber of Commerce.

The council also needed to be more proactive in dealings with the city's MPs, with Wellington and with industries eyeing investment in the city.

Olivier Lequeux said the city's economy was in a ''dire'' state, and the council's efforts to date were ''misplaced''.

He scoffed at the economic development strategy's ''totally ridiculous'' focus on China, saying the money would be better spent elsewhere.

''The money is spent in areas that do not bring any comfort to people who live and trade here,'' he said.

He wanted more support for new and relocating businesses, including offering land at low or no cost and other support while they established.

Kevin Dwyer also worried about Dunedin's economy, saying the combination of debt and low growth created ''a recipe for disaster''.

He dismissed the council's efforts to date, including the economic development strategy, saying: ''I don't think it's been very good at all, really.''

He supported an extension of the Dunedin airport runway, and construction of the waterfront hotel, to boost the tourism industry, and attracting the oil and gas industry, to help the city's manufacturing and engineering sectors.

Green Party candidate Aaron Hawkins said the economy was ''not in the death spiral that some people would suggest'', but the council still needed to be more proactive in the hunt for new opportunities.

He wanted closer collaboration with the tertiary sector to help retain, or lure back, new graduates, as well as increased support for Dunedin businesses through council contracts and procurement.

The council should also negotiate with landlords to lower rents and offer more short-term leases, to help fill some of the city's empty shops, he said.

''We have a lot of for lease signs in shop windows in the CBD and South Dunedin, and that has to change,'' he said.

Steve McGregor said the city was ''doing well'', despite Hillside's closure and the city's debt levels, but the council needed to do more to promote the city for visitors, students and businesses.

The council needed to do more to develop the harbourside to attract new businesses, after missing out on the $100 million waterfront hotel, and should work with the university to attract more high-tech business to the city.

''Tourism is worth millions to Dunedin and we could easily double this ...the council needs to do more to support this.''

What they said
Kevin Dwyer
The council processes are too difficult. They are discouraging businesses.
- Council not doing enough.
- Promote tourism, pursue oil and gas drilling.

Andrew Whiley
They [the council] haven't followed through on their talk.
- Council not doing enough.
- More promotion of city's business advantages needed.

Mayor Dave Cull
We are not going to be a major heavy manufacturing centre ever again.
- Dunedin's economic development strategy main initiative of last three years.
- Implementation of the strategy the key for the next decade.

Aaron Hawkins
We have a lot of for lease signs in shop windows in the CBD and South Dunedin, and that has to change.
- Council initiatives a good start, but more needed.
- New ways to retain graduates and support Dunedin businesses should be focus.

Hilary Calvert
There isn't a lot of jobs, and it's serious because we are not in the mood to encourage the next one.
- Council not doing enough.
- Council should consult businesses about changes to encourage job creation.

Pete George
There doesn't seem to be much traction on the economy or jobs.
- Council not doing enough.
- Better communication needed with Chamber of Commerce, Wellington and potential investors.

Cr Lee Vandervis
You can not create real jobs unless you first create a business-friendly and attractive environment.
- Council doing too much of the wrong thing.
- Unitary council, runway extension, business development/arts and culture initiatives for growth.

Olivier Lequeux
The money is spent in areas that do not bring any comfort to people who live and trade here.
- Council not doing enough.
- Offer low-cost land and other support to new and relocating businesses.

Steve McGregor
Tourism is worth millions to Dunedin and we could easily double this.
- Council not doing enough.
- City needs to promote itself to visitors, students and businesses.