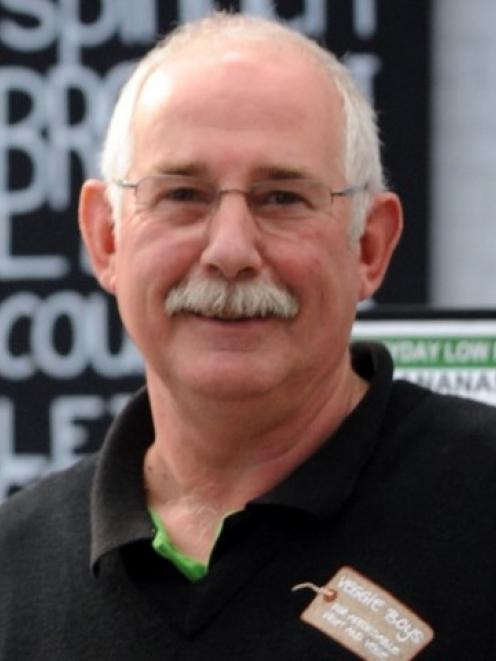 Marty Hay: 'Everybody says there's a great economic boom. There isn't in Dunedin, and we've got to tighten our belt.'
A costly consent hearing is being blamed for Veggie Boys' Mosgiel store withering economically and it will close at the end of the month.

Veggie Boys' co-owner Marty Hay said the Bush Rd store was not economically viable and management had decided to ‘‘pull the pin''.

The outlet had been open nearly two years but three months after opening, business became difficult when the owners were required to obtain a consent for it to operate, he said.

Mr Hay was disappointed with the opposition.

''You can see why a lot of people don't want to do business out at Mosgiel.''

The council considered any perceived precedent was limited and granted a resource consent.

However, he said the consent process confused customers and the financially healthy Mosgiel store started to wither.

''Many people thought we were closed. We never really recovered after getting the resource consent. We were going very well before that.''

The consent process was an ''economical disaster''.

''The resource consent cost me tens of thousands of dollars . . . If I knew how much it was going to cost I wouldn't have bothered.''

The owners were disappointed but the store closure was an economic necessity, he said.

''It was a head decision. It wasn't a heart decision. If I made it with my heart I would have persevered.''

The company's accountant told him to close the store and the four staff were told of the closure on Friday, he said.

A couple of full-time staff had accepted jobs in Dunedin Veggie Boys stores; the other full-time worker was moving to Central Otago, he said.

A young man working part-time had not decided if he would accept work in a Dunedin store, Mr Hay said.

The Dunedin stores in Cumberland St, Albany St and Macandrew Rd were going well, but reports of economic prosperity in the city were overblown, he said

‘‘Everybody says there's a great economic boom. There isn't in Dunedin, and we've got to tighten our belt.''