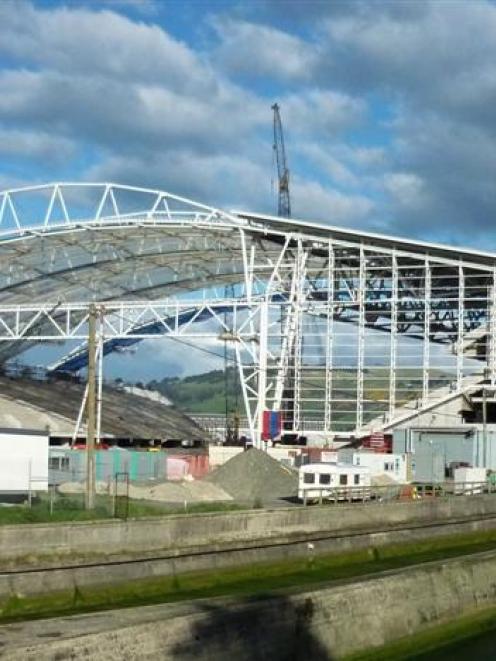 It also became clear at a Dunedin City Council meeting that a catering fit-out was the essential item in a list tagged for additional funding at the stadium - a list that expanded during debate.

Dunedin Venues Management Ltd (DVML) chief executive David Davies told the meeting the issue needed debate, and needed it quickly, if the stadium was to be ready in time for the Rugby World Cup.

And Mayor Dave Cull responded to comments from Cr Fliss Butcher he was going back on election promises, saying he had never said he would make a blanket refusal on spending on the stadium.

Rather, he said after the meeting, his pre-election position had been if spending was the difference between the facility opening or not, he would have to consider it.

The council debated a report on "possible additional" spending at the stadium of $4.35 million.

The report included a list of 11 items listed as "excluded" since 2008, including kitchen fit-outs, scoreboards and replay screens - items that have been widely reported in the past as requiring spending - and some new items, including signs and communication facilities.

At the urging of Cr Lee Vandervis, another item was included, moving the stadium's media box from the south to the north stand, a decision made last year that would allow increased revenue.

During debate, Cr Kate Wilson asked about turnstiles, which were not included at the stadium, and was told by Mr Davies the stadium could run efficiently without them.

They were something he would prefer to have, but were an option that could be considered over the next five years.

Public address systems would cost up to $40,000 to buy; hiring them would cut into profits.

Mr Davies said for each item, DVML had a mitigation strategy, but hiring any equipment - from replay screens to toilets - cut into profits.

The catering issue was another matter.

Catering made the second greatest contribution to stadium revenue, and was the first thing people saw when they walked into the facility.

For the kitchen fit-out, timing was important, and the "lead time" for manufacturers to provide the equipment was now tight.

Mr Davies defended aspects of the original planning for the stadium when questioned by Cr Vandervis, and said the world was a different place than it was four years ago.

In terms of renting space at the stadium - the fit-out of level 2A for rental was one item on the list - he said a landlord was in a stronger position than a tenant at that time, but that had "turned 180deg".

Signage, also included on the list, was not needed for matters like fire evacuation, as basic signage and seat numbering was planned for.

But signs to "tell a story" of how to find seats, and where food and other services were, were not.

Responding to a question from Cr Jinty MacTavish, Mr Stephens said "with a hearty shake" he could have the review ordered by the council ready in about a week.

The meeting also ordered a final report from the rates funding working party, on its efforts to find money for the stadium, for a finance, strategy and development meeting on March 14.

Mr Cull said after the meeting, as soon as those reports were in, the council would sit to make a decision.

In the final part of the meeting, Cr Butcher moved that no more ratepayer money be spent on the stadium.

But only she, Cr Vandervis and Cr Teresa Stevenson voted for that option.