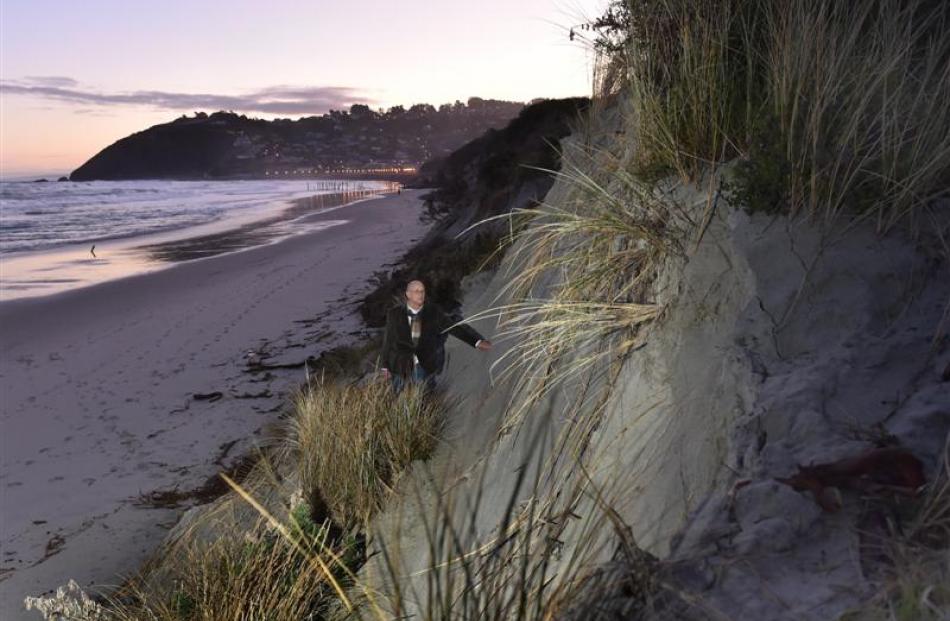 St Clair resident Bill Brown at the foot of the steep face that has formed at St Clair Beach. Photo by Peter McIntosh

Dunes along Dunedin's Ocean Beach have receded nearly 9m in the past four weeks and will continue to disappear unless immediate action is taken, a St Clair resident told the Dunedin City Council yesterday.

Council staff responded by insisting mitigation measures would be in place this summer and there was confidence no private property would be at risk before then.

Bill Brown, who initially raised his concerns in the Otago Daily Times last month, feared no urgency had been shown by council staff since then.

Yesterday, he took those concerns to the council's community and environment committee, where he presented several aerial photographs showing the extent of recent erosion.

Since July, he had driven several stakes into the dunes' ridge-line and then taken measurements later of where that ridge-line had fallen away.

His measurements showed 8.7m of the dune's top, including foliage, had vanished between the St Clair Surf Life Saving Club and the St Clair Scout Hall, in Victoria Rd, in four weeks.

That showed the dunes' erosion had continued unabated, despite no repeat of the violent storms which caused major erosion in June, he said.

The erosion was happening at the ''toe'' of the dunes, causing them to collapse, leading to the slippage of the foliage-covered ridge-line into the sea.

Some buildings were now just 12m from the dune's face, he said.

Spring's king tides were still to come and could bring dramatic further erosion, he said in his written submission.

He said it was not only St Clair residents who were concerned, and that there were ''quite a few folk out there'' who used and loved St Clair and were concerned at the erosion they could see from the Esplanade.

But that concern turned to horror when he showed them photographs highlighting the extent of the problem, he said.

''Yes it can rebuild itself, but the issue is right at the moment. It is an immediate problem right now.''

He told the meeting the council's approach of waiting, observing, and acting some time in the future was simply not tenable.

''It's just got to be put in place. The cost of that is infinitesimal compared to the cost of not doing it,'' he said.

Council staff could not confirm Mr Brown's measurements but ''had no reason to doubt them'', Mr Saunders said.

While it was understandable people wanted action now, or at least firm dates for action, those details could not yet be given.

He said the council and its erosion experts believed there was no risk to private property in the immediate future, including the expected spring king tides.

It was next winter's storms that were the real danger, and the council would have repaired and replaced damaged sand sausages by then, while adding more where needed.

There was a lead-in time, which included the design, manufacture and delivery of the sand sausages themselves, which meant installing them immediately was not possible, he said.

''As soon as we have something in terms of `this is the date we'll have a digger on the beach', we'll let people know.''

Once the sand sausages were installed, the council would begin work on the long-term measures needed to keep erosion at bay, one of which was a buried backstop wall, but other options would be investigated, too.

Mr Brown said the council response was encouraging, but he would be paying close attention to what happened next.

''I am encouraged, and I'll be keeping in close contact with council and keeping them on the job.''