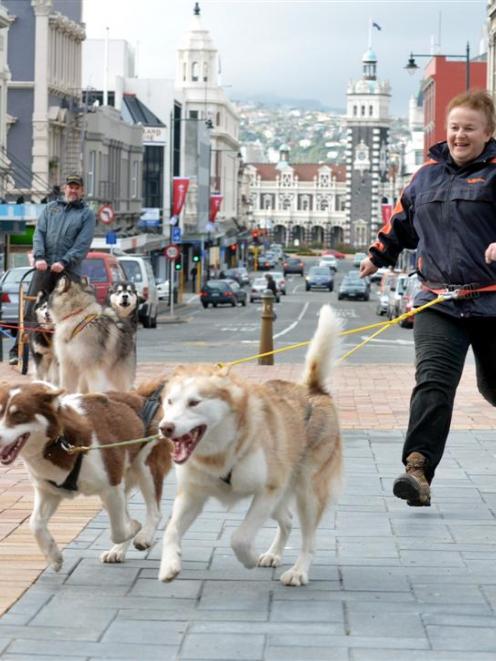 Canadian eskimo dogs Mawson and Clara take owner Rose Voice, of Real Dog Equipment, Ranfurly, for a run in the Octagon, while husband Nigel Voice watches. Photo by Stephen Jaquiery..
It may be the middle of winter, but it could have been the tropics for a couple of visitors to Dunedin this week.

Two Canadian eskimo dogs were in town to promote a film about their own.

The pair are the only Canadian eskimo dogs in New Zealand and descendants of the last sled dogs to work in the Antarctic.

The Last Dogs of Winter is a 2012 New Zealand International Film Festival documentary about a Canadian trying to save the eskimo dog species from extinction.

For thousands of years, the dogs were indispensable to humans in the Arctic, who relied on them for transport, hunting, protection from wild animals and, in desperate times, food.

The dogs are capable of surviving in extreme temperatures and pulling weights of up to 80kg for vast distances over snow and ice.

However, modern technology such as motorised skidoos spelled the beginning of the end for the species in the 1980s and only about 500 dogs now remain in North America.

Canadian eskimo dogs were brought to the southern hemisphere in the 19th century to work in the Antarctic.

"We're in the home stretch now, and the figures are better this year than they were last year. There's not a lot competing for attention in town at the moment and the programme is very good this year.

There have been some good, accessible films with good reviews.

"It's also the only opportunity to see films of this calibre in Dunedin."

The Last Dogs of Winter screens at 3.30pm on Sunday at the Regent Theatre.