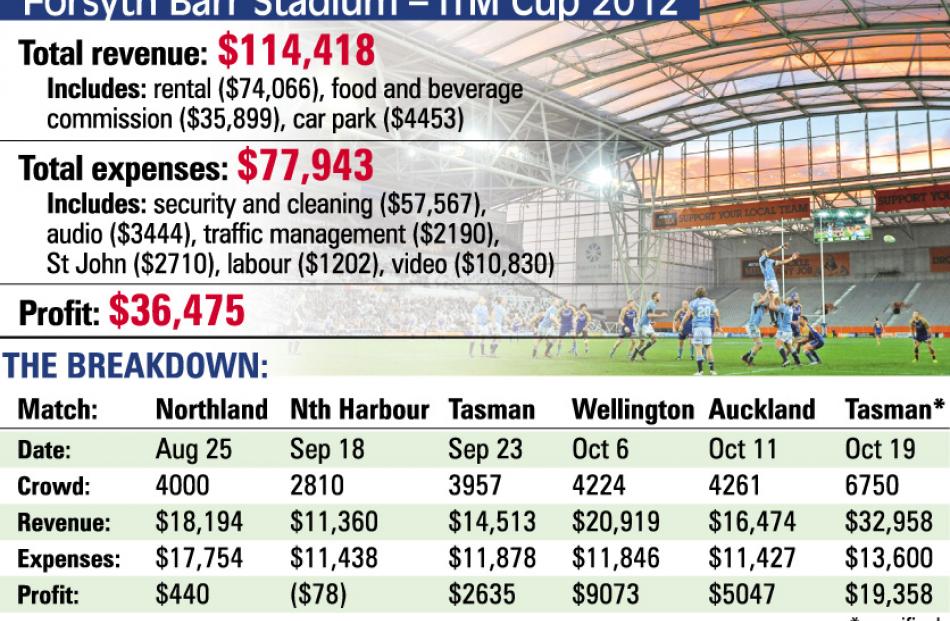 Figures released to the Otago Daily Times showed Dunedin Venues Management Ltdbooked a profit of $36,475 after hosting six Otago ITM Cup home games, including a semifinal against Tasman on October 19.

The results came after a turbulent year, including revelations of a $3.2 million loss, and left DVML chief executive Darren Burden "reasonably happy" yesterday.

However, there was room to improve, and he wanted to build on the result next season.

"I think we have done pretty well. I would like to see an improvement on that next year."

The result comes after DVML also booked profits from this year's Super 15 season and from hosting its first All Blacks test on September 15, although details could not yet be released, he said.

A breakdown of ITM Cup figures was released after an official information request by the ODT and showed DVML's returns had improved as the season went on.

The company was left with a profit of just $440 from Otago's first home game, against Northland, watched by a crowd of 4000, but then posted a $78 loss when the second match, against North Harbour, attracted just 2810 fans.

However, the situation steadily improved.

The biggest return came when Otago hosted the semifinal against Tasman on October 19, attracting a crowd of 6750 and generating a profit of $19,358.

DVML received a share of all ticket sales from each ITM Cup match, although the "lion's share" went to the ORFU, Mr Burden said.

However, the ORFU did not get a share of food and beverage sales, which generated $35,899 for DVML across the season.

Mr Burden said DVML had faced challenges during the ITM Cup season, including building a working relationship with "lots of new faces" within the Otago Rugby Football Union, attracting sponsorship and fans.

The figures also showed DVML staff had become "a little bit smarter" about running the venue efficiently as the season progressed.