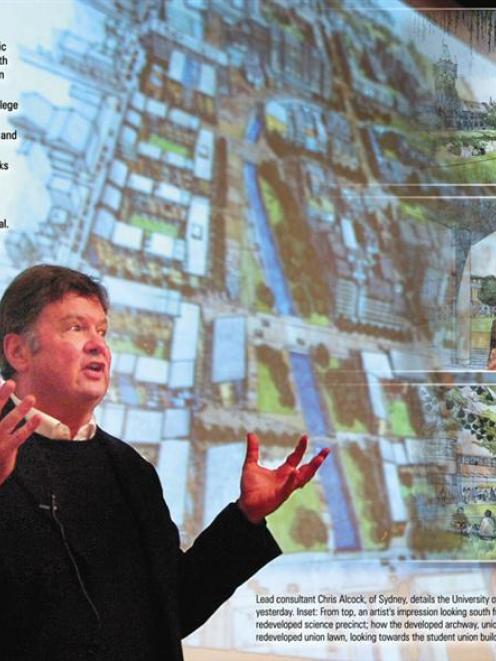 A plan detailing how the University of Otago might improve its campuses and expand over the next 25 years received an enthusiastic and positive response when it was launched yesterday.

Written by an international team of consultants following a year of consultation, the Campus Master Plan was Otago's chance to have an "outstanding campus", vice-chancellor Prof Sir David Skegg told an audience of about 150 invited guests.

"We have a beautiful campus ... but we can't be complacent. The university needs to grow," he said.

"This is a whole series of opportunities," he said.

Those at the launch seemed to agree.

Those approached afterwards described the plan as "exciting", "significant", "visionary" and "inspirational".

One of the most controversial proposals is to remove the State Highway 1 S-bends and reinstate the one-way highways as two-way streets.

The plan said that would slow traffic down and free up 1.2ha of land in a part of town which had been rendered "bleak" by the creation of the bends.

The plan outlines a "fall-back" position for that proposal and others which involve land acquisitions.

Dunedin Mayor Peter Chin, who is a member of the university council, said the plan contained controversial aspects such as the plans for the Water of Leith and the state highway.

"This is going to cause much debate in the community.

"It is going to make the stadium and the town hall debates fade into complete insignificance.

"But that's the way of the future. Change creates debate, some of it passionate.

"The easiest way is to do nothing, but if Dunedin had historically chosen that path it would be a very different place to the vibrant city it is today."

The university council, the city council and other agencies would have to "evaluate the plan over a long time" and decide individually and collectively where the priorities were and what decisions should be made, Mr Chin said.

Asked how it might be funded, he said the council would "plan its way through the expense".

"We will have to be cautious and prudent. But opportunity will prevail".

Otago University Students Association president Harriet Geoghegan said there were some "really great" potential developments in the plan and she was particularly pleased to see the emphasis on improvements to teaching facilities and the planning for flexible teaching, learning and research spaces.

One member of the audience asked why the plan proposed demolishing some buildings rather than their upgrading.

There was a tendency for campuses to die "from the inside out" unless unsuitable older buildings "past their use-by date were demolished", Mr Alcock said.

Prof Skegg said the consultants had proposed more demolitions but senior staff involved in the report had disagreed.

"We told them there had probably been only one building demolished in the university's 140-year history and that was the tin shed at the mining school ...

"This is a compromise".