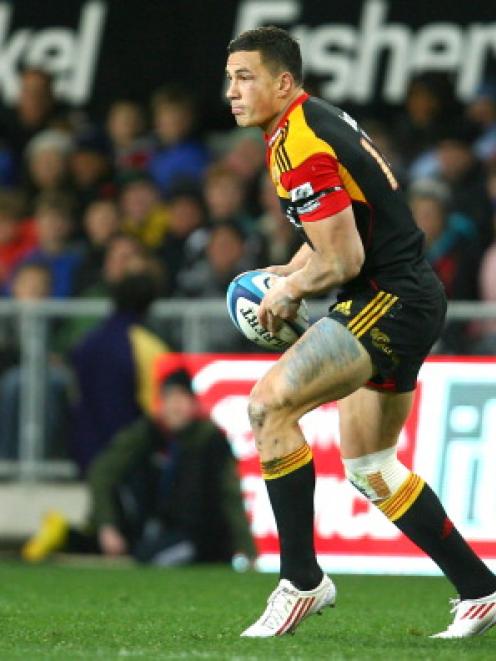 Fans have flocked to see stars like Sonny Bill Williams. (Photo by Teaukura Moetaua/Getty Images)
It has been built, they have come, but unfortunately - last night anyway - they went away sad.

The Highlanders might be out of the running of the Super 15 playoffs, after losing 27-21 to the Chiefs last night, but that has not stopped them having a stellar year through the turnstiles.

More than 120,000 tickets have been bought at Forsyth Barr Stadium this year, with the average crowd more than 7000 above last year's.

Last year in six games, just over 60,000 tickets were sold for Highlanders games at Carisbrook.

Highlanders general manager Roger Clark said the franchise had been really pleased with the crowds this year and was already planning to improve the stadium experience next year.

"The crowds really have been fantastic. I think you can put that down to the new stadium, and the way the team has been performing," he said.

"The atmosphere inside the ground has been top-class - it shows you just what a great place it is to watch rugby."

Mr Clark said two of the games were scheduled during university holidays, and the crowds could have been even bigger.

The Highlanders were well ahead of what had been budgeted for, which would help the franchise's balance sheet.

During last night's game against the Chiefs, the Zoo enclosure was not opened, because students are on holiday, but that game still drew a crowd of 17,401 for the final home game.

The Zoo, which provided entertainment additional to the rugby at the western end of the ground, proved popular, while the scheme to attract families had sold out at all games, Mr Clark said.

Dunedin Venues Management Ltd chief executive David Davies said the Highlanders had to be congratulated on the entertainment they had laid on, both on and off the field.