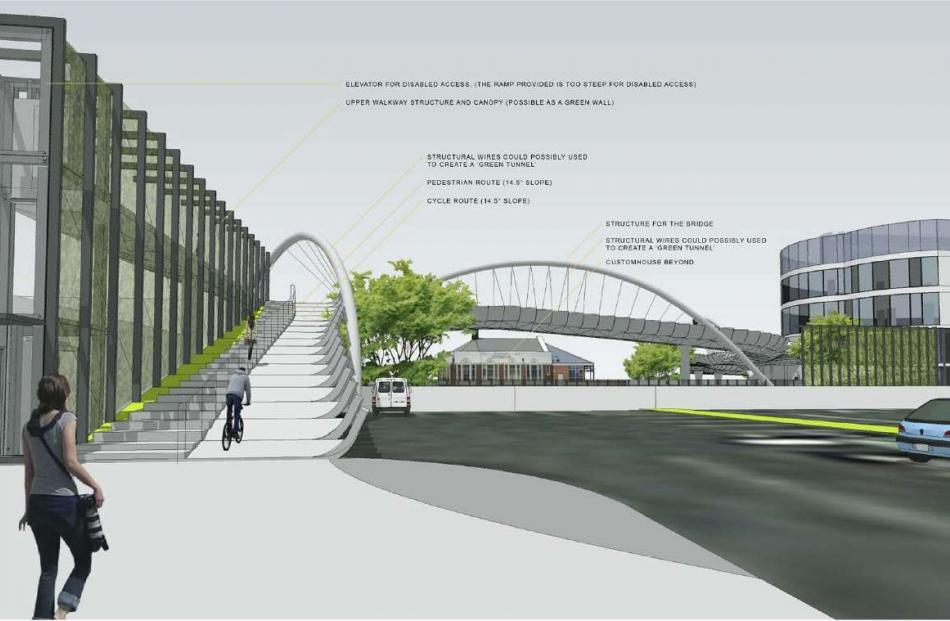 An artist's impression shows what the proposed pedestrian and cyclist bridge would look like when viewed from beside the Chinese Garden towards Dunedin's waterfront. Image: Ignite Architects 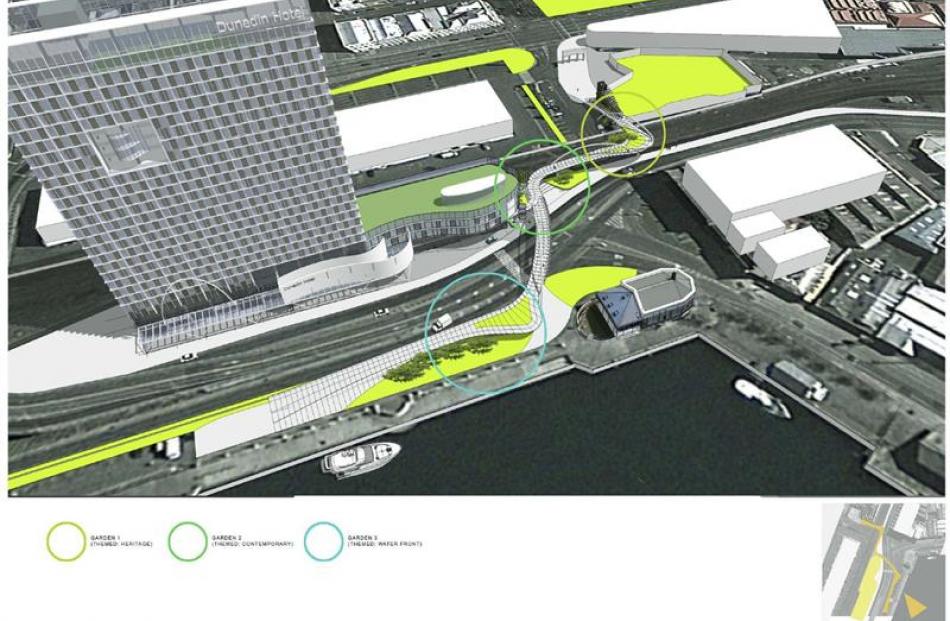 The bridge would twist its way from the Chinese Garden (top right) to the harbour basin (bottom) while crossing the main trunk railway line and Wharf St. A separate spiral ramp and lift would provide direct access to the proposed waterfront hotel.... 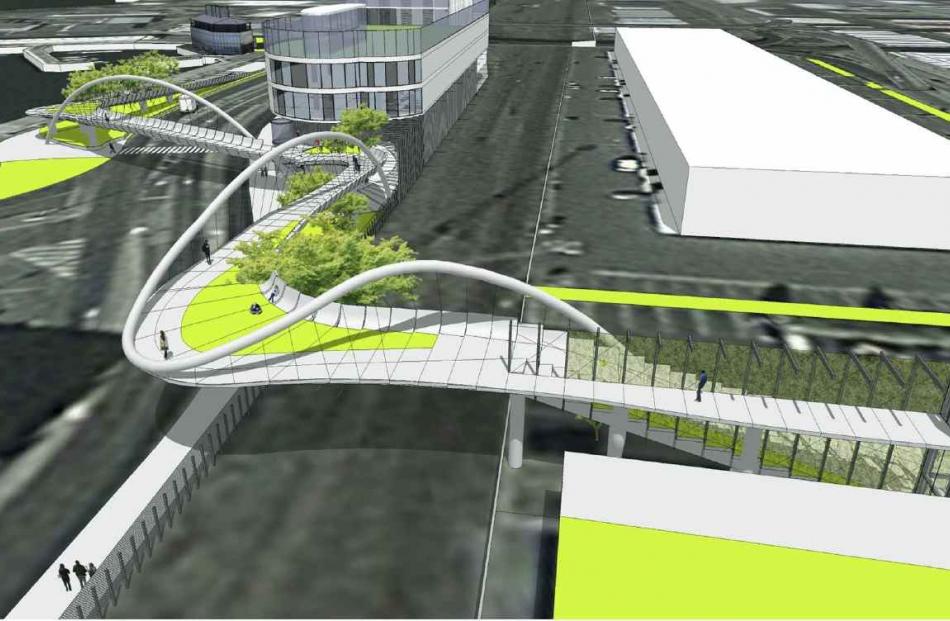 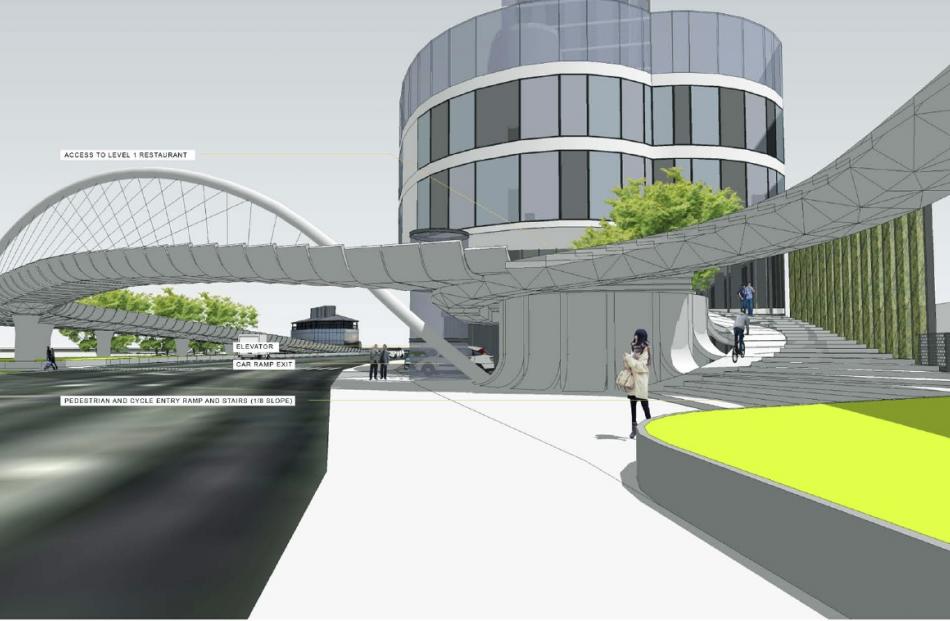 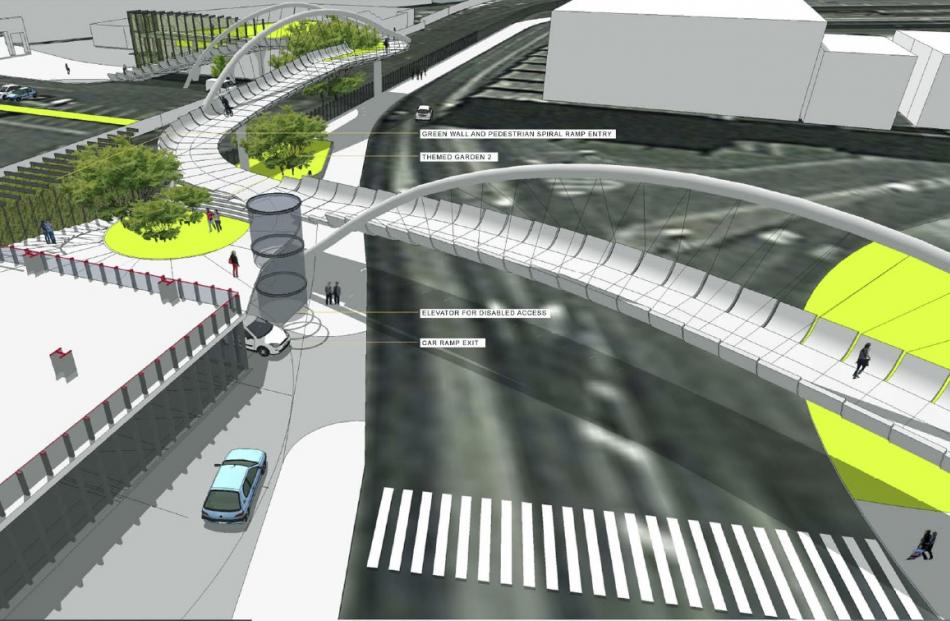 The man promoting Dunedin's proposed 28-storey hotel has unveiled plans for a "world class" pedestrian and cyclist bridge that could provide a missing link to the city's waterfront.

However, the idea is only the "starting point for a discussion", with key details - including how much the sweeping structure would cost and who would pay for it - yet to be confirmed, Betterways Advisory Ltd director Steve Rodgers said.

He presented the bridge plans to the Otago Daily Times yesterday, saying the project could be a "win-win" for the city and the developers, but was not an attempt to sweeten the hotel deal.

His move came as a DCC hearings committee prepared to consider Betterways' application early next month for resource consent to build the $100 million hotel at 41 Wharf St.

Mr Rodgers said the bridge plans were the work of Ignite Architects, but still needed to be discussed with the council, KiwiRail and the New Zealand Transport Agency staff once a consent decision was made.

The plans showed the bridge cutting a twisting path from the Chinese Garden, across the main trunk railway line and Wharf St to the harbour basin, with glass-covered lifts, stairs and ramps providing access.

A separate spiral ramp and lift part-way across would provide direct access to and from the hotel, if built, on the western side of Wharf St.

The bridge would also pass through three small, decorative gardens, while steel arches helped suspend the structure above the road and railway lines.

The bridge would "solve the problem" of restricted access to and from the waterfront to the Queens Gardens and Chinese Garden area, Mr Rodgers said.

The council last year scrapped plans that could have resulted in a similar "landmark" bridge being built on the same spot, at a cost of up to $3.5 million.

That meant the nearest pedestrian crossing remained a narrow overbridge beside the Dunedin Railway Station, about 150m away, which linked to Thomas Burns St.

However, interest in a new crossing beside the Chinese Garden had re-emerged this year, during consultation on the future of Dunedin's heritage warehouse precinct.

It was anticipated the new bridge would cost "more than $1 million", at least, Mr Rodgers said.

It was not yet known if the bridge would require a separate resource consent, and a detailed costing was yet to be prepared.

That meant all possible funding arrangements - including the developer paying for it all, or a cost-sharing deal involving the council - remained "on the table", and would be discussed after the hotel consent hearing, he said.

"Just like a ratepayer, no-one wants to pay for it, but that's part of the negotiation."

As well as providing a link for hotel guests, the bridge would carry cyclists safely to the waterfront cycleway running along Portsmouth Dr to Otago Peninsula.

"All we are saying is here is something we would like to talk to the council [about].

"This is absolutely ideal for our time, to make us a world-class small city," he said.

Dunedin Mayor Dave Cull could not be reached for comment yesterday.