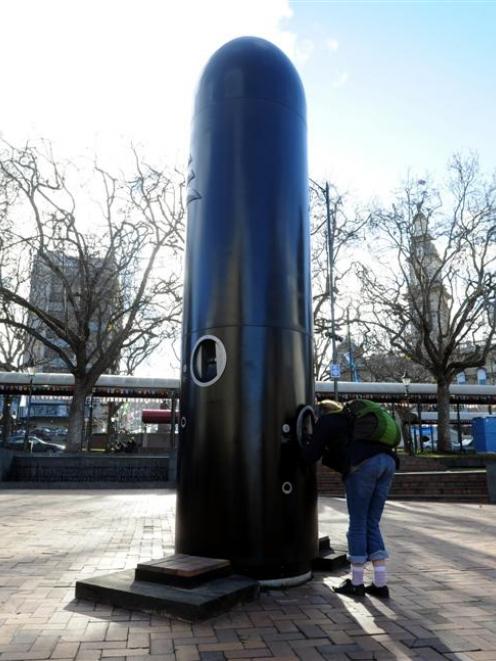 The Rugby Haka Peepshow in the Octagon has aroused the ire of critics. Photo by Peter McIntosh.
Provocative public art or ratepayers' money down the drain? Love it or hate it, Dunedin's Rugby Haka Peepshow has certainly stimulated debate. Reporter Chris Morris finds out how it happened.

A phallic piece of public art in Dunedin's Octagon - described as a rented "black penis" by some - has aroused the ire of critics and generated international headlines in the midst of the Rugby World Cup.

Now, the chairman of the Dunedin City Council's art in public places subcommittee, Cr Bill Acklin, has admitted he did not fully understand what the Rugby Haka Peepshow would look like.

He has also conceded the public needed to have a greater say earlier in the process, so future public art projects could be considered "before anyone has a chance to rubbish it".

However, Cr Acklin has also defended the decision to proceed with the Octagon artwork, as well as its cost and the secrecy surrounding it, while taking a swipe at fellow subcommittee member - and critic of the project - Cr Lee Vandervis.

His comments came after council staff this week - at Cr Acklin's request - released minutes of non-public council meetings at which the project was considered, stretching back to March this year.

The minutes showed all three councillors on the AIPP sub-committee - Crs Acklin, Vandervis and Jinty MacTavish - voted against the project, but were outnumbered by non-council members of the subcommittee, which pushed it through.

That was only after Ngai Tahu offered to increase its share of the cost, reducing the council's share to $50,000, to be paid from the council's marketing budget instead, the minutes showed.

Cr Acklin, speaking in detail about the project for the first time, told the Otago Daily Times he hoped the account provided by the minutes "puts everything in perspective".

He remained angry Cr Vandervis had gone public with claims about the project being a waste of ratepayers' money "to suit himself", while the details were still confidential, saying Cr Vandervis was not the only one to have concerns.

"We're not allowed to comment and because we don't we're seen to be the thugs making a mockery of everything, whereas I think it's the other way around."

Ms Rakena said at the time it aimed to consider the "commodification of Maori and indigenous sportsmen", as well as the "sexualisation" of Maori, and included a phallic reference.

The work attracted $80,000 in funding from Ngai Tahu and $50,000 from the council's marketing budget, and was to remain in the Octagon until the end of the Rugby World Cup before being moved initially into storage at the Dunedin Public Art Gallery (DPAG).

However, it also attracted national and international headlines - and even its own Twitter account - after Cr Vandervis went public earlier this month, criticising spending "to rent a black penis in the Octagon".

The release of minutes this week meant the decisions could now be debated publicly for the first time, he said. The minutes covered four meetings of the AIPP subcommittee and the community development committee - both of which Cr Acklin chaired - as well as the finance, strategy and development committee chaired by Cr Syd Brown.

The documents showed the work had first been proposed by Ms Rakena at an AIPP subcommittee meeting in March, with discussion at a subsequent meeting in June about the need to find partners to share the $130,000 cost.

Ngai Tahu wanted to support Ms Rakena's work, and had "tentatively agreed" to spend $30,000, but might increase their share, a council staff report said.

The project was first approved by the AIPP subcommittee at a non-public meeting on July 5, despite Crs Vandervis and MacTavish supporting a move by Cr Acklin, as chairman, to scrap the project.

The subcommittee then voted to commission the project on July 5, with a budget of $130,000, with only Cr Vandervis recording a vote against the move and Ms Larkins abstaining.

However, the subcommittee's decision was then referred to the council's community development committee meeting to be held on July 27, the minutes showed.

Cr Acklin said that was because council staff, in the days after the decision, questioned whether the subcommittee had overstepped its authority in approving the project.

The subcommittee could only approve spending of up to $100,000, but it was unclear whether the limit related to the total cost of the project or the council's share, Cr Acklin said.

That meant the "cautious" decision was made to refer the project to the non-public part of the Community Development Committee (CDC) meeting, where councillors had the power to approve the project as an art in public places work, Cr Acklin said.

Councillors at the meeting then voted to reject the project, instead sending it to the council's finance, strategy and development committee meeting - to be held the next day - as a possible Rugby World Cup project, minutes showed.

Cr Acklin said yesterday he had already asked for it to be added to the Finance Strategy and Development Committee (FSD) committee agenda as well, because of a "gut feeling" it would be rejected by councillors at the CDC meeting.

Minutes from the non-public part of the FSD committee meeting the next day showed councillors were told Ngai Tahu had offered to contribute up to $100,000, with the council contributing a reduced amount of $50,000.

The money was proposed to come from the council's marketing budget.

The recommendation was approved 10-3, with Crs Vandervis, John Bezett and Neil Collins voting against the move and Cr Acklin among those to support it. Cr MacTavish withdrew because of a conflict of interest.

A confidential staff report, considered at the meeting, also said Ngai Tahu wanted the council to "consider being the work's ongoing guardians".

Cr Acklin said yesterday the minutes showed how the council process had unfolded, and that it was clearly not an art in public places project when approved.

"It was really up to the council to say, 'Well, do we want to support this or not?'," he said.

"Obviously, most of the council overall felt it was appropriate to be delivered in that way."

Cr Acklin said he voted against it as an art in public places project because of its cost, temporary nature and concerns it was a user-pays artwork - something since clarified to be only gold coin donations.

However, he said he voted for it as a Rugby World Cup project because of the reduced cost to the council and the desire to support Ngai Tahu's contribution to the Rugby World Cup.

"We were trying to find the best for both worlds. I was trying to reduce the cost to council . . . but when Ngai Tahu came back and said, 'We really want to do this and we'll take up the biggest cost part, will you be a partner?', I thought, 'Well, that's reasonable'."

Information about the project was finally released by Mayor Dave Cull after the FSD decision, covered by the Otago Daily Times.

Cr Acklin said it was not until Cr Vandervis' comments caused confusion about whether the work was an art in public places project that "all hell broke loose".

The public reaction was also fuelled by the way information was released to the media, meaning the project never had a chance of acceptance, he believed.

There had been "quite a bit of debate" about the shape of the artwork, but those involved had been assured it referred to a deodorant can brand the All Blacks endorsed, Cr Acklin said. It was only when final design drawings were completed there was "a little bit of concern as to the presentation", he said.

"I suppose the understanding of the work was not that great.

"It was explained to us as being a 'Rexona' can, and I assumed that it would have Rexona written on it. It wasn't until later in the piece that I found out that that wasn't going on it."

Asked if that was an oversight or a minor matter, he said, "You could probably call it both."

"It's not because of commercial sensitivity. It's because of people's reputations."

The lack of public input had been "one of my biggest concerns", but work on the Peepshow project had begun too late to allow public input and meet the Rugby World Cup deadline, he said.

However, the public outcry showed the council would have to find a way to involve the public earlier in the process in future, he believed.

A review of the process had been requested, and would include consideration of how to do that, he said.

"[The subcommittee] needs to somehow bring the community on board at the earliest possible stages."