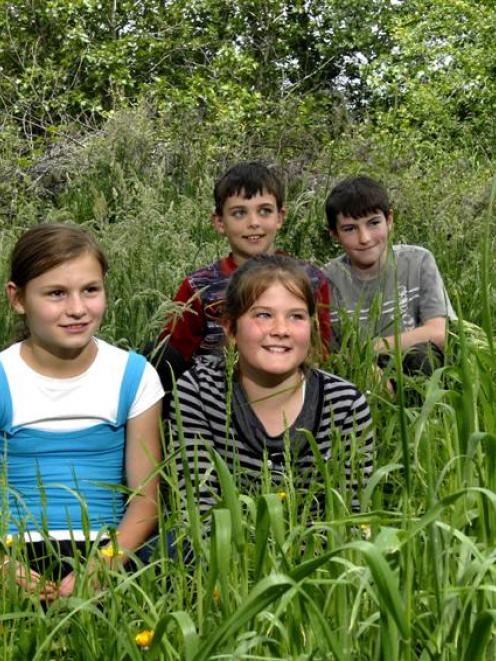 East Taieri School pupils (from left) Maddie Campbell (11), Curtis Stent (10), Charlotte Cotter (10) and Finn Hodge (11) among scrub which will be transformed into a native garden in the Treemendous School Makeover next year. Photo by Gregor Richardson.
Although East Taieri School is 155 years old - and ageing well - it will receive a well-earned makeover in the new year.

The 300-pupil school is one of four schools in New Zealand to win a Treemendous School Makeover - a joint initiative by the Mazda Foundation and Project Crimson Trust in which the school's grounds will be enhanced with a native tree garden.

As well as improving aesthetics, the rocks would also provide a suitable place for pupils to sit while they waited to be collected after school.

The running track on the fitness circuit would also be replaced, she said.

"Our school is 155 years old, and has the most amazing grounds.

"We have been very active in the last six years with many environmental projects, and each year we have completed a special project to enhance our grounds."

While the new-look entrance would complement the school's mural, the plants would attract skinks which would aid the school's work with the Department of Conservation and the University of Otago to preserve the local skink population.

Parents and school supporters would join forces with the Treemendous Team in March next year to complete the makeover, she said.