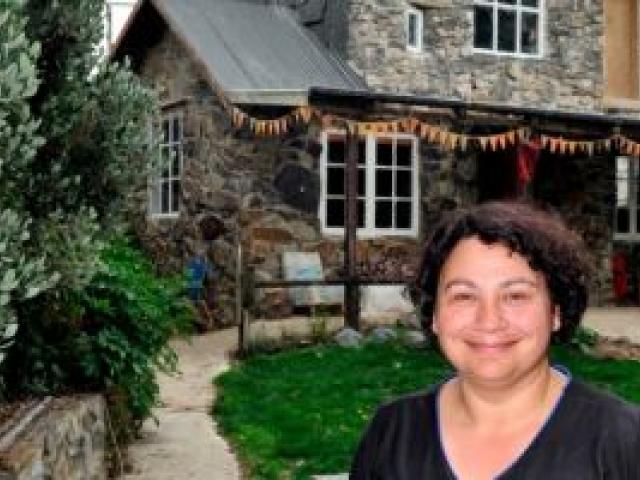 Metiria Turei's two-bedroom castle is far from a mansion. Photo: Craig Baxter
Metiria Turei, according to her political adversaries, lives in a castle. She comes to Parliament dressed in $2000 Adrienne Winkelmann designer jackets. And then she wants to talk about poverty.

Yesterday, the Green Party co-leader tentatively opened her doors to our photographer - and revealed a wardrobe filled with more blue than green. "I quite like blue," she laughed.

So what's she doing with the left-leaning Greens, this power-dressing politician with a three-storey, turreted home looking out over Blueskin Bay?

Well, this visit clears up a few things. The two-bedroom "castle" is made from stone and corrugated iron. Old fridges serve as cupboards and doorways; a large truck tyre has been turned into a window frame in the master bedroom. A new pizza oven, made from mud, straw and sand, rests on a stack of tyres.

It would seem she's living the slogan: reduce, re-use, recycle.

Turei and her husband, Worik Stanton, bought the castle for $137,000 last year - a sum that won't even buy a one-bedroom studio apartment in central Auckland.

She stood atop the turret, clad in clothes from The Warehouse and K&K, and surveyed her domain. "It's a castle but it's not a mansion, and we love it," she said.

The castle had hosted many community events including children's birthday parties, potluck dinners and a funeral.

But there were some concessions to that power-dressing political lifestyle, she conceded. The master bedroom was too small to store her clothes so she kept them in the spare room downstairs.

Leading the way in, she pulled aside a purple curtain to reveal a makeshift wardrobe.

Senior Cabinet minister Anne Tolley had labelled Turei "a list MP who has no constituents, lives in a castle and comes to the House dressed in $2000 designer jackets".

Fellow minister Chris Finlayson accused her of lecturing National on social justice while "resplendent in her Adrienne Winkelmann jackets".

And a third minister, Judith Collins, hammered in the final nail, calling Turei a "sanctimonious hypocrite" in an "ugly" jacket.

"She could sell a jacket and feed a child for a year," Collins said.

But Turei was unrepentant yesterday as she showed off another "made-to-order" Adrienne Winkelmann suit, hanging from a hook in the castle. "Being a slightly older and more luscious shape, it can be very difficult to find really good quality suits that fit off the rack."

It should be noted that Collins, Education Minister Hekia Parata and the Prime Minister's wife, Bronagh Key, have all been seen wearing Winkelmann designs.

Turei was loyal, she said, to Auckland-based Winkelmann and Dunedin designer Tanya Carlson.

"As a bigger woman, they treat me really well. They are very kind about my body - they never disparage my shape or my size."

Also hanging from the hooks in Turei's make-do wardrobe were clothing from Dunedin thrift store Purple Rain and the boutique Roadside Attraction in Waikouaiti, 20km up the road.

Draped among the designer clothing was the soft brown jacket of her father, who died in 1995.

So, one question remains to draw a line under this sorry dispute: does she regret accusing the National ministers of racism?