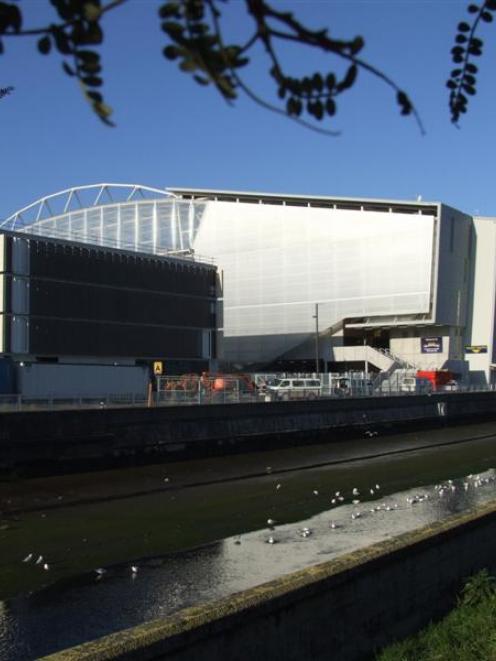 Forsyth Barr stadium. Photo by the ODT.
Dunedin ratepayers are on the right side of the scoreboard, despite receiving just a fraction of what had been hoped for from last month's North-South charity rugby clash, Mayor Dave Cull insists.

It was confirmed yesterday the game at Forsyth Barr Stadium had generated a profit of just $21,412, after teams shorn of All Blacks and other top players drew a crowd of 7427 fans.

The profit was much less than the $200,000 hoped for by Mr Cull when details of the match were unveiled in March, as part of the rescue package designed to save the Otago Rugby Football Union.

The Dunedin City Council and Dunedin Venues Management Ltd were together owed $480,000 by the union, but agreed to scrap the debt in return for a package including proceeds from the North-South match.

At the time, Mr Cull told media he hoped for a return from the match of 50c for every $1 owed, "or maybe more".

Yesterday, he said that "wasn't to be", but the result did not change his views of the wider deal "at all".

"This was always just an add-on bonus.

"We always would have wanted as much as we could get out of it. That's what we got. I treat it as a positive."

The package also included confirmation of top-tier test matches at the stadium in 2013 and 2014, and, crucially for the council, venue-hire agreements tying the Highlanders and the ORFU to the stadium for three years.

Without the agreements, the council feared professional rugby and its income could be lost to the stadium, in turn threatening private-sector funding arrangements used to help pay for the venue.

That would leave ratepayers exposed to larger rates rises to cover the shortfall.

"The ratepayers are better off than they would have been with the alternative," Mr Cull said yesterday.

"That was always the case and nothing has happened to change that."

Earlier yesterday, DVML chief executive David Davies issued a statement confirming revenue of $114,808 had been generated by the match, with a profit of $21,412 once costs of $93,396 were covered.

Match costs included about $13,000 spent on advertising and promotion by DVML, but staff costs were not part of the bill and nor was any venue hire agreement, it was confirmed yesterday.

The rest of the costs were for services by third parties, such as security and cleaning contractors, and flights, accommodation and transport costs for the teams.

Mr Davies said the result was a "positive outcome" for the city, and DVML's share would become part of the company's revenue stream.

Mr Cull said the council's share would be added to its consolidated fund.