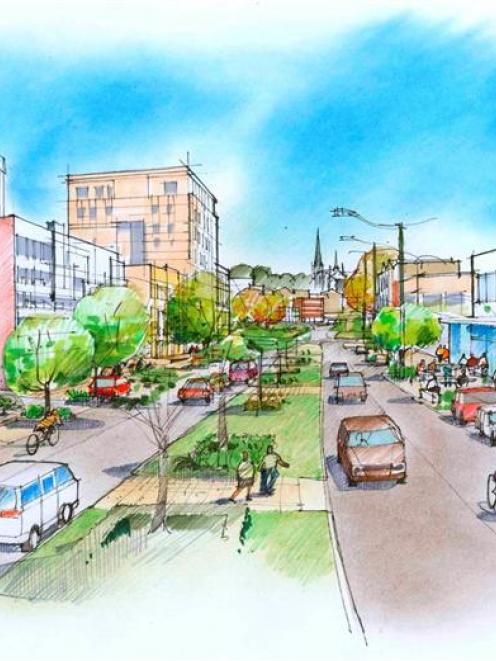 Dunedin's one-way Crawford St could become a more welcoming two-way road, better suited to cyclists and pedestrians, as part of changes being considered by the Dunedin City Council. Image supplied.
A plan to rearrange Dunedin's one-way street network to breathe new life into the city's faded heritage warehouses has cleared a key obstacle, but faces another in the form of a $5.6 million price tag.

A feasibility study prepared for the Dunedin City Council by consultant MWH has confirmed the proposal to reconfigure Crawford and Cumberland Sts is technically possible within available space.

In the proposal, both of the one-way arterial routes would be converted into two-way streets between Andersons Bay Rd and the Leviathan Hotel, near Queens Gardens.

However, the work would come at significant cost, with MWH estimating a "rough order" bill of $5.694 million, excluding the cost of land purchases expected to be required in places.

The council's draft central city plan envisaged the area as a vibrant hub of apartments, cafés, bars, restaurants, creative businesses and office space, but also saw the existing road configuration as a barrier to those plans.

Cr Wilson said the one-way streets turned the warehouse precinct into an uninviting "island" that was difficult to reach for pedestrians and cyclists, but changing the road layout could trigger redevelopment.

"It's not a pleasant area to walk, to ride or to just sit and relax in.

"The fact that two-waying can happen means a lot of other things can happen ... I think people are quite excited about the prospect of how that area might develop."

She supported the project, believing the warehouse area was more suited to development than previous council plans for Dunedin's harbourside area.

However, financial pressures meant it was more likely to be an option in "three or four years", she believed.

The New Zealand Transport Agency would also have to be approached to discuss sharing the cost, she said.

In the meantime, the project remained in the council's draft long-term plan - with no budget attached - as "a maybe", meaning the public could make submissions on it for consideration during May's draft budget hearings, she said.

"If people are excited by it they actually have to submit on it to try and ramp it up, really," Cr Wilson said.

The council's planning and environment committee had endorsed the draft central city plan in October last year, which envisaged $13 million in improvements to the Octagon, George St and other parts of the central city - including parts of the warehouse precinct - over the next decade.

Cr Wilson said at the time the roading changes would be "pivotal" to the rest of the work.

The MWH report showed the $5.694 million bill would include $2.46 million for changes along Crawford St, another $1.73 million for Cumberland St, and $500,000 for urban design work, among other costs.

A 4.5m-wide shared pathway would also be built alongside Cumberland St, providing safer access to and from the central city, warehouse precinct and southern suburbs for cyclists and pedestrians, separate from traffic flows.

There would also be changes at intersections along both roads, including lane configurations and some restricted access to and from side streets.

Consultation was yet to be undertaken, but would be required with landowners and occupiers of premises affected by the project, as well as the wider community to "achieve buy-in", the report said.