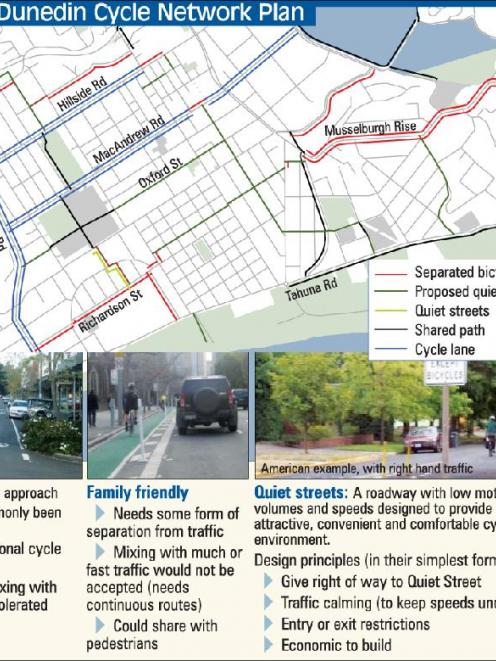 South Dunedin streets could become low-speed quiet zones, as part of a $4.5 million plan to improve the area's cycling facilities.

The proposal was part of the South Dunedin Cycle Network Plan announced yesterday and to be considered at a Dunedin City Council meeting on Monday.

If approved, work could be under way within months on the first ''quick wins'' that could provide an almost continuous route from South Dunedin to the central city, Mayor Dave Cull said.

The plan, which was still subject to public consultation, would see a network of new cycling facilities across South Dunedin, eventually linking to new facilities in the central city and beyond.

The council and New Zealand Transport Agency were working together on plans for the central city and North Dunedin, which had been accelerated in response to cycle safety concerns.

Among plans unveiled for South Dunedin yesterday was a proposal to turn some streets into ''quiet streets'' that encouraged the safer sharing of roads, with 30kmh vehicle speed limits. Traffic calming measures, changes to Give Way priority at intersections, and new vehicle entry, exit and turning restrictions, would also be included, although residents' vehicle access would remain.

The idea was among four different styles of new cycleway facility proposed for the network, depending on the location of each route, traffic engineering and planning consultant Axel Wilke, of ViaStrada, said.

Separated cycleways or paths would be built along other parts of the South Dunedin network to provide routes completely separated from the dangers posed by passing vehicles.

And, in other areas, more common roadside cycle lanes, already found in parts of Dunedin, would be added, Mr Wilke said.

Council transportation planning manager Sarah Connolly said the council had budgeted $4.5 million for the work over three years, beginning in 2012-13, but the New Zealand Transport Agency was expected to contribute $3 million of the total cost. If approved, it was hoped work would begin about the middle of this year, she said.

The $4.5 million upgrade compared with the Ministry of Transport's value of statistical life - an attempt to measure the social cost of road crashes - which stood at $3.77 million per fatality, or $4.44 million per crash, in June last year.

''I think it does put the expenditure in context, when the cost to the wider community of one death is pretty much what we have allocated over three years for the cycleway network,'' Mr Cull said.

The new details unveiled yesterday came after the council endorsed a Strategic Cycle Network plan for the city in 2011, Ms Connolly's report said.

The council had assessed and prioritised 37 city routes, giving more weight to safety improvements, which resulted in South Dunedin's routes being given priority. The South Dunedin project had also been renamed, from the Southern Commuter Routes to the South Dunedin Cycle Network, to reflect the wider uses catered for.

Mr Wilke said the majority of people were put off cycling because of concerns about mixing with high volumes of fast-flowing traffic.

Investment in dedicated, separated cycleways was needed to cater for those potential riders, but a ''huge'' 15% jump in cycling in South Dunedin could result over time.

Quiet streets, already used overseas, could be controversial but were the most economic way of improving safety.

They would provide residents all the benefits of living on a cul-de-sac, but also ''the slight disadvantage of a longer journey'' for some motorists, Mr Wilke said.