Residents fight for footpaths near school 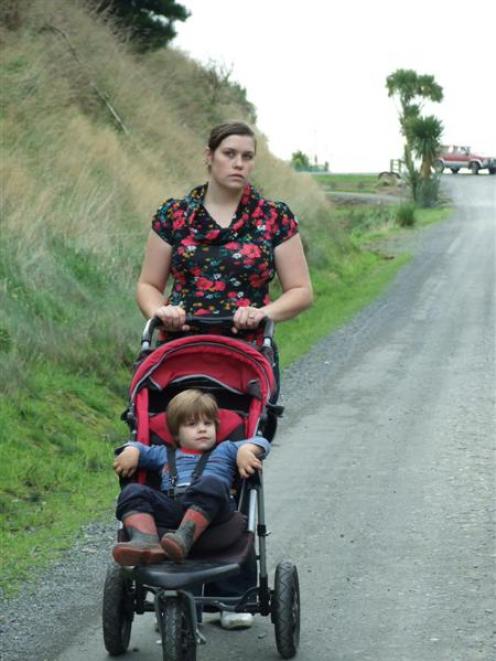 Concerned mother Amanda Duthie pushes her son Michael (2) down Kilgour St, Waihola. Photo by Helena de Reus.
Waihola residents are fighting for the installation of footpaths on streets around their local school.

At the Clutha District Council's annual plan hearings last week, resident Dorothy Clark asked for the installation of footpaths on Kilgour St and George St near Waihola District School. Kilgour St was used by heavy trucks as their preferred route in the township as it was less steep than others, she said.

The street was worse in wet weather.

"When my husband and I came here 13 years ago there were only two children living on Kilgour St and nearby streets.

George St resident and mother Amanda Duthie said there were many young families in Waihola, several living near Kilgour St or George St.

"I'd like the street to be a lot safer than it is. Even a footpath along one side would make a huge difference," she said.

Mrs Clark also asked for the continuation of seal from Sandhead St to George St in Waihola.

Kilgour St is sealed from Chatham St, past the school, finishing just before Sandhead St. She said a slight rise in Kilgour St after the school caused a loss of visibility, making it very dangerous.

"You can be walking along feeling quite safe and all of a sudden there's a car roaring down the street," Ms Whittaker said.

It was also difficult to take children walking when studying the history of the area as there was nowhere for them to walk, she said.

Waihola township is 35km south of Dunedin and has a population of about 200. Waihola District School has 27 pupils.