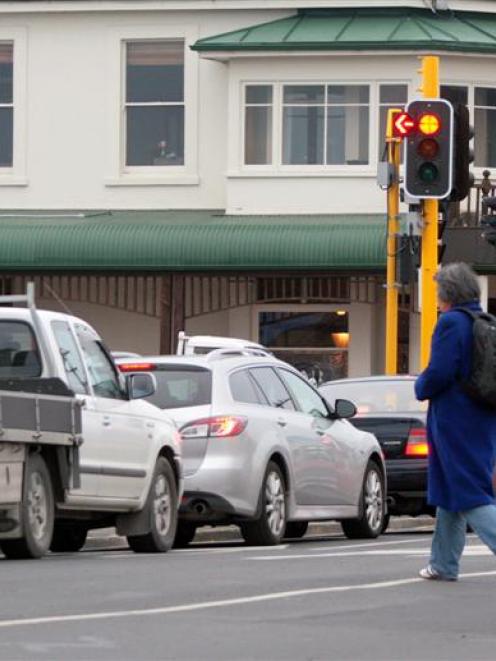 The King Edward St and Macandrew Rd crossing in South Dunedin has a bad safety record. Improvements are being made to protect pedestrians. Photo by Dan Hutchinson.
A safety project involving many of South Dunedin's major intersections is well under way.

Contractors have been busy over the last few weeks at the Macandrew Rd-King Edward St crossing and more intersections are scheduled for upgrades this year and next.

''[We are] providing some facilities for cyclists, providing for the visually and mobility-impaired and we are doing operational changes that should result in the reduction of the crash rate by up to 40%.''

Turning arrows had been added to the lights and the light poles shifted to make it easier for people in wheelchairs and scooters to push the button.

The green lights would be delayed a few seconds to allow crossing pedestrians to be noticed by turning traffic - the changes were not all about improving vehicle traffic flow.

''There will be probably slightly more delays than there were previously but we are putting safety ahead of efficiency.''

Work is planned at the intersection of Andersons Bay Rd and Hillside Rd over the next year for the same reasons.

''There is a big push to improve accessibility across there - people in wheelchairs, it is very difficult for them to get across,'' Mr Minnema said.

Right-turning arrows would be added to allow traffic to turn right from King Edward St, south of Hillside Rd, into Hillside Rd.

Mr Minnema said they were also taking another look at the Anderson Bay-Midland St-Macandrew Rd intersection but those plans were not ready yet.

Some changes were likely at the Andersons Bay Rd intersection near the new Countdown Supermarket. Mr Minnema said the turning lane would be shortened and the straight-through lane shifted to the right, lessening the deviation for straight-through traffic and providing more space for cyclists.

The South Dunedin upgrades were part of a city-wide effort to make intersections safer. Preliminary results for the intersections done more than a year ago had been ''quite encouraging'' in terms of reducing crashes, he said.