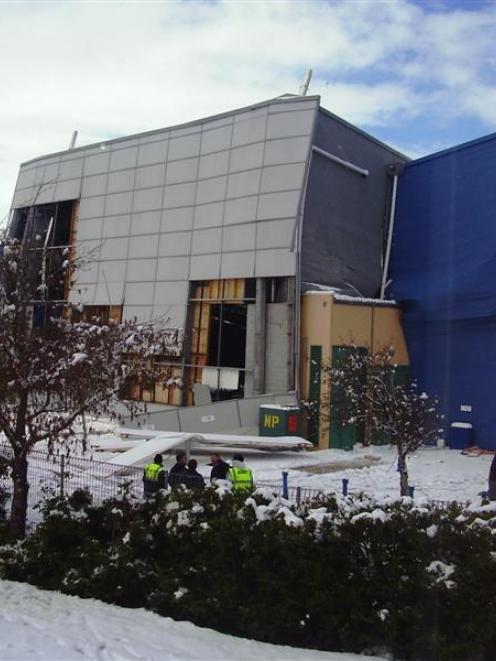 The damaged stadium where the roof has collapsed under the weight of snow. Photo by Tony Kennedy
The roof of Stadium Southland has collapsed under heavy snow as a "wild and windy" storm blasts parts of the country, closing roads and bringing down power lines and trees.

Between 10-20cm of snow has fallen in coastal parts of Southland and residents are asked to remain in their homes and only travel in urgent cases because of the threat of ice on the roads.

"Conditions are treacherous and people shouldn't be on the roads. It is wild and windy at the moment," Senior Sergeant Maggie Windle said.

Cautions are in place for numerous roads. In Otago SH87 between Outram and Middlemarch is closed because of snow.

Stadium Southland, which houses an indoor cycling velodrome, lost its roof in the storm and suffered significant damage this morning.

The Fire Service was called to the scene at about 11.30am and the building evacuated.

Southland Civil Defence group controller Neil Cruickshank said the stadium had suffered major damage to the roof and the structural integrity of the building had been compromised.

There have also been reports of a roof collapse at the Windsor Street New World in Invercargill, forcing its closure.

With the dense snow there was concern for other roofs around the city, but not to the extent they could collapse, Mr Cruickshank said.

However, there have been no reports of injuries.

State Highway 94 Te Anau to Milford Sound and SH 87 Outram to Middlemarch have both been closed because of heavy snow and the Chaslands Highway, through the Catlins, will be closed from 5pm tonight.

Fonterra warned farmers its trucks could not return to the Edendale milk factory today.

Metservice has forecast more snow to low levels in Fiordland and south Westland today and tomorrow, though these are not expected to be as heavy as yesterday.

In the North Island the storm has caused surface flooding to some roads and brought down power poles near Wanganui.

SH1 north of Bulls is closed because of flooding and detours are in place while slips and surface flooding have closed SH3 at Ratana.

A heavy rain warning has been issued for the Central North Island and up to 100mm is expected in the Tongariro National Park.

Also a further 60-80mm rain is expected in the ranges of Buller and northwest Nelson today.

The storm with gale force winds and lightning strikes had cut power to around 47,000 customers in the past 24 hours in the central North Island, Powerco Network operations manager Phil Marsh said.

The lines company has restored supply to around 30,000 customers so far and is urging members of the public to keep well away from downed overhead lines and any other damaged network equipment.

A number of dairy farmers urgently needed their power supply restored in order to milk cows, he said.

Currently a very strong cold westerly flow covers New Zealand and another fast moving front is expected to cross the South Island today and move onto the North Island this evening, according to Metservice.

That means northwesterlies should strengthen over central New Zealand as the front approaches and severe northwest gales are expected in parts of the Hawke's Bay, Wairarapa, Wellington and Marlborough.