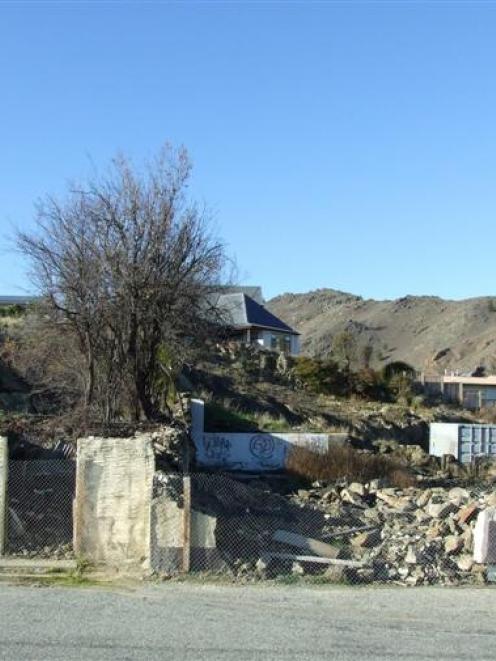 The old Criterion stables in Alexandra, earmarked for demolition. Photo by Lynda Van Kempen.
The owner of two partly-demolished heritage buildings in the centre of Alexandra says a planning decision by the Central Otago District Council has effectively prevented him from developing the site.

"I might as well just hand it over to the council because I can't really do anything with it," Mervyn Miller said.

The Mosgiel man had applied to the council for retrospective consent to demolish two stone buildings in McDonald St listed as heritage buildings in the district plan, and to clear the site.

The council has given its consent, subject to several conditions. One requirement is for the exterior walls of one of the buildings to be rebuilt to a height of 2.2m and the southern stone wall of the second one rebuilt or retained, stabilised and capped, to a height of 1.5m.

Its decision has been hailed as a "sensible solution" by submitters who opposed the demolition but Mr Miller said he would appeal the decision.

Council hearing panel chairman John Lane said the building owner could still develop the site and incorporate the rebuilt walls of the historic buildings, citing The Warehouse in Alexandra as an example. The Warehouse, which opened in September 2002, converted the old Bank of New Zealand building to use as its garden centre.

The site was the location of Alexandra's first school and that building was replaced by Criterion Hotel stables, one of the stable buildings con-structed between 1875 and 1890 and the other around 1899-1900.

A fire in the stables two years ago damaged the roof and the council agreed to the partial demolition of the buildings last year because of concerns for public safety. That demolition work was arranged by the council.

Evidence given by the New Zealand Historic Places Trust at the planning hearing showed it was practical to retain and or rebuild some of the stable walls, the council said in its decision.

As well as retaining and rebuilding some of the walls, the property owner must ensure the remains of the buildings and site are inspected and recorded by an archaeologist.

Any schist stone not used in the rebuilding must be made available for the restoration of other heritage buildings in the town. A plaque must be attached to a portion of the original stone walls explaining the history of the site.

Mr Miller said although consent was granted, he believed the conditions would prevent him developing the site.

"It made the best of a bad situation and we can live with that. The important thing is that what's standing can be preserved so it can be incorporated in any future development and we're happy with that."

He said the matter had been described by others as a "test case" and he was sure the council and community had learned some lessons from it.

"The building has been significantly modified by fire and reduced in size, but the retention and stabilisation is a sensible solution, considering the importance of this building.

"We don't have to lose something in its totality for it still to be a viable building."