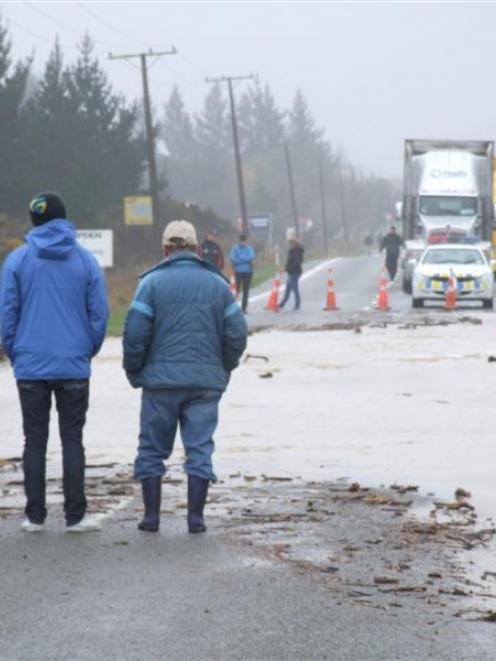 The cost of last week's flooding in Otago is expected to be millions of dollars, but the region's infrastructure seems to have escaped major structural damage.

authorities say final figures will not be known until floodbank, bridge and road inspections are completed.

The Waitaki District Council predicts damage to its roads will be "in the hundreds of thousands of dollars".

Roading assets manager Geoff Young said yesterday the final cost would depend on what damage was found.

"We still have some bridges under water," he said.

The council had a disaster fund of about $3.1 million, but money it took from that had to be replaced.

Some work could be funded from depreciation.

The council qualified for a New Zealand Transport Agency subsidy "in the order of 60%" for flood damage repairs.

Clutha District Council communication co-ordinator Jamie Shaw could not say last night how much it would cost to repair damaged roads.

There were still many roads to check and it could be months until the full costs were known.

The council would make a supplementary claim to the New Zealand Transport Agency for assistance.

Damage in Dunedin is expected to put the city council's $1.3 million environment maintenance budget "under pressure".

Programme engineer Mike Harrison expected to know in the next few days how the slips and flood damage would impact on the budget.

Mr Harrison said a 55% subsidy was available from the agency.

Depending on the severity of the damage, the subsidy could be bigger.

NZTA agency network manager for Otago and Southland Murray Clarke hoped to know by Friday what costs the agency faced for highway repairs and for maintaining 24-hour services during the past week.

It was likely to add up to hundreds of thousands of dollars.

Mr Clarke had no reports of serious structural damage from agency consultants.

Contractors were dealing with a "spate of potholes", some bridge approaches would need repairs and "quite a bit" of work would be required to remove a gravel build-up at Big Kuri bridge, north of Hampden.

With the reopening of State Highway 1 north of Pukeuri yesterday morning - after almost a week - all highways in the area are open again.

There had been no reports of any significant damage to infrastructure so far.

Floodwater covering the railway line south of Allanton for the past five days had receded sufficiently by 3.45pm yesterday for trains to start running again.

The city council hopes its biggest slip, on Portobello Rd between Castlewood Rd and Broad Bay, will be cleared by mid-morning today.

Insurance Council chief executive Chris Ryan said there had been "quite a few" claims after bad weather throughout the country - "probably in the hundreds, not thousands".

He believed everyone could "consider themselves pretty lucky" that floodbanks protecting towns and cities were not breached.

"Overall, it was not a big event for insurers and not a large number of claims - possibly in the millions [of dollars], in the very low millions."

The Earthquake Commission has received 138 claims for $1.5 million from across the country during the past two weeks.

Insurance manager Lance Dixon said the commission was bringing in assessors to work on the claims.