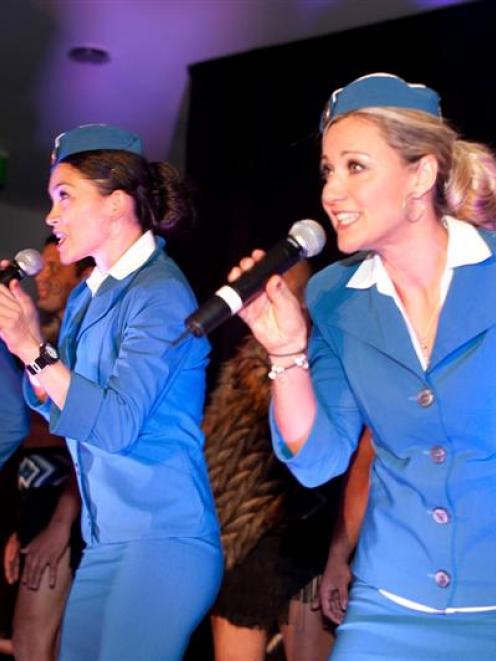 Queenstown-based act the Sequin Sisters (from left) Charlotte Graf, Tania Pimm and Nikki Bodle singing their rendition of I Gotta Feeling by the Black Eyed Peas, at the welcome function for Trenz 2012 on Monday night. Photo by Murray Lloyd Photography.
Visit China, meet travel sellers, work with Destination Queenstown and get on the learning curve for the growing Chinese tourism market, is the advice for Queenstown operators from Tourism New Zealand.

Kevin Bowler, chief executive of the country's marketer to the world, also called for a convention centre in Wakatipu, when he addressed media delegates at Trenz 2012 yesterday.

After his presentation, the Queenstown Times asked Mr Bowler what his advice would be to grassroots tourism operators who might feel daunted by the Chinese tourism opportunity.

"At this time, I really think there's a big education phase. China will evolve as we saw Japan evolve 25 years ago, to be more like some of the other markets we're more familiar with.

Asked how Queenstown could benefit from the projected masses of middle-class Asians looking for their next holiday, Mr Bowler said he was "very optimistic" for the Lakes District.

"The trick, I think, is to grow the mono side of it, so if you've got visitors who are here just to New Zealand, chances are they're going to be staying just a week or so and that gives them the opportunity to arrive in Auckland and then still see some of the South Island.

"Where we run into difficulties, in terms of distribution of visitors, is where they're doing a week across Australia and New Zealand and they're really only seeing Auckland, and possibly Rotorua.

"So the opportunity is really focusing on those mono visitors and I think the [air] connection between Auckland and Queenstown is a good one."

Asked if he forecast a recovery from New Zealand's traditional Western visitor markets, Mr Bowler said a rise in arrivals would occur as economic conditions improved in Europe.

"I don't think you're going to get a massive renaissance, but it's realistic to assume we're in a low point in our cycle at the moment and we'll see an improvement.

"Watching the politics in Europe at the moment, changes in government, reactions against the austerity measures that appear to be quite necessary, you've got quite a lot of uncertainty in that part of the world and that's likely to be the way for a little while."

The United Kingdom remained a major market for New Zealand, but the chief executive said many British tourists would not travel overseas this year, because of the Queen's diamond jubilee and the London Olympic Games.

Closer to home, Mr Bowler said convention facilities in Queenstown would be "a big plus for the town" on top of its "great activities and accommodation".

A convention centre would "attract higher-spending visitors and that would be of great value to the region".

"Getting the size right is really important, studying the market and not overbuilding would be getting it right," he said.

"Getting it close to hotel infrastructure is important, because if delegates are constantly on buses you don't have nearly as good an experience as if you've got people who can be accommodated close by."