Push-bikes and a drop of pinot 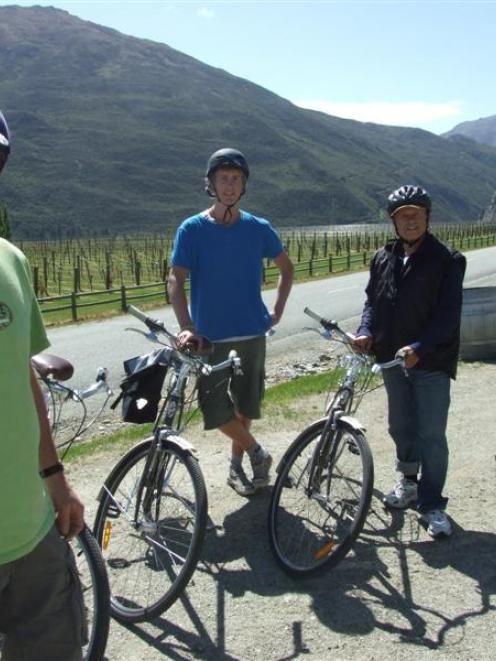 Traversing back roads, vineyard trails and the recently completed Gibbston River Trail, the tours stop by a selection of cellar doors and for a picnic along the way.

Owner-operator Greg McIntyre said the venture was not aimed at "big winos" but was instead a relaxed trip for people who enjoy both the outdoors and "the odd tipple".

He said the trips, which began a few weeks ago but are yet to have their official launch, came about after he spotted an opportunity for such an experience around Gibbston.

"It would be silly if I was just going to open up another operation up at the Bike Park, and here, instead, it is filling a lot of gaps in the recreational market ... so we have on one side the full-on downhill, and here, the biking."

Mr McIntyre said the Picnic Bike Tour Company was, as far as he was aware, the only operator with concession for the Gibbston River Trail.

He hoped the tours of up to eight people could run for close to nine months of the year, with one to two tours a day, at least for the first year.

• Industry representatives at a wine and winery tourism forum last week said Queenstown was underselling itself in that market, compared to Australia.

Destination Queenstown marketing general manager Graham Budd said at the forum the aim was to start using wine as the "primary driver" to attract people to Queenstown and the wider region. He said yesterday that while experiences like the cycle tour were not part of the "true wine experience", they were nonetheless part of an overlapping and complementary industry.

"There's lots of synergy and lots of overlapping with all of these things and, at the end of the day, they are all going to enhance the overall experience."