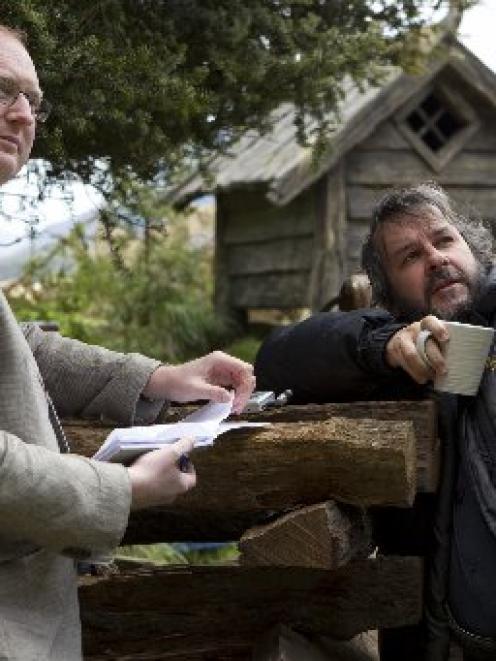 Sir Peter Jackson points out details of his set to Otago Daily Times journalist James Beech in between takes of filming scenes for his prequels to The Lord of the Rings trilogy on the remote Arcadia Station, near Queenstown.Photo by Mark Pokorny/New Line Cinema
The old giant beech tree which prompted Sir Peter Jackson and 450 cast and crew members to film a scene for The Hobbit near Paradise, beyond Glenorchy and Queenstown, survived for a century until a storm blew it down six weeks ago.

This, however, was a Hobbit-sized problem in the grand scheme of issues for the Academy Award-winning screenwriter-producer-director in his bid to deliver Hobbit adventures to the world.

"We came down about six months ago to choose the exact spot where this house was going to get built, and one of the reasons why it's being built where it was is because of this amazing tree that we had standing right there," Sir Peter said.

"The tree we thought would be great to have right in the front of yard of the house was there for 100 years until six weeks ago, when it got blown over in the wind.

If the company was likened to "a travelling circus", as Sir Peter described it, then he is the ringmaster.

A core of creative crew members toured, with support crew hired in the Wakatipu or wherever else they happened to be working, Sir Peter said.

"Generally, you spend three, four, five days in one place because often you're only shooting one or two scenes there and because The Hobbit is a story of a quest, it's a travelling story, so virtually every scene takes place further along on the journey.

"It's a continuously changing landscape we're looking for."

Stern Wellington security guards at the entrance asked what I was doing there, despite my being expected and my vehicle being covered in Otago Daily Times signs.

I was asked for identification, given a confidentiality agreement to sign and told to turn off my cellphone.

A minivan shuttled me and the unit publicist from unit base down a winding unsealed road to "tech base", a few minutes away.

Planks of wood were lain across patches of mud, rain drops blew in the chill wind, but sunshine occasionally broke through.

Sir Ian McKellen was in full Gandalf the Grey costume and make-up on the green screen set.

Sir Peter's voice was heard giving directions on loudspeaker, but he was out of sight in a tent, viewing monitors attached to the 3-D cameras, being used for the first time in Middle-earth.

On the command "And action", everyone was silent as Gandalf walked slowly, staff in hand, down green-screen covered steps and the runway-like platform to stand beside a green-screen pole and ball and talk to Beorn (Mikael Persbrandt).

Monitors watched by crew members revealed how Gandalf and Beorn appeared to be standing on one of the adjacent physical sets, which featured an oversized workshop and barn, tools and a vegetable garden between real and fake trees.

Other two-storey-high sets included a scrub-covered gate and bee hives on shelves in an open-sided building with tussock on the roof.

About 10 minutes later, Sir Peter said on the loudspeaker "That's good" and gave instructions for another take.

Crew members murmured as they focused on their next task.

I was struck by the slightly surreal sight of Martin Freeman, dressed as Bilbo Baggins, with all 13 Dwarves, in full regalia, trudging down the incline from the rustic oversized set.

Each actor was given a black puffer jacket to wear over their costume and cups of steaming beverages.

Many pairs of hairy prosthetic hands were then carefully laid on a trestle table while the Hobbit and Dwarves went on their immediate epic quest - lunch.