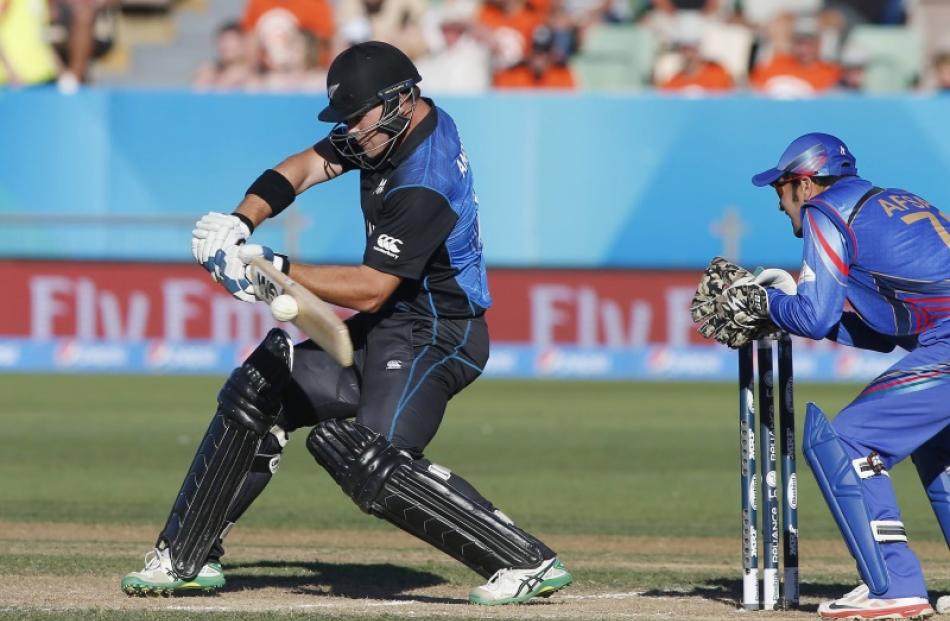 Having dismissed their opponents, who had won the toss, for 186, New Zealand reached 188 for four with 13.5 overs to spare.

New Zealand now have one group A game remaining, against Bangladesh in Hamilton on Friday, before the start of the knockout stage.

Afghanistan play England in Sydney, also next Friday to complete their first venture into the World Cup.

They were no different to other teams of late early in New Zealand's chase, when they felt the lash of captain Brendon McCullum's bat as he raced to 42 off 19 balls.

His dismissal, playing on a ball from rival captain Mohammad Nabi, slowed the chase.

Kane Williamson pulled a ball to mid wicket, while opener Martin Guptill, one of three in the top five in need of runs and time in the middle, made 57 before being run out in a stop-start mix-up with Ross Taylor.

Grant Elliott then took on mid-off's arm and lost shortly before the win was secured, Taylor finishing unbeaten on on 24 off 41 balls, Corey Anderson on seven.

Afghanistan recovered from an awful start to reach a respectable total.

Having won the toss, Afghanistan did the unexpected and chose to bat. Nothing wrong with the pitch conditions, among the best for batting in the country. But the groans from the crowd when the decision as made told their own story.

They wanted to see a full day's cricket. Afghanistan batting first didn't seem a surefire way of guaranteeing that.

When they lost their first wicket in the second over, their second in the fourth over and their sixth at 59, things didn't look promising.

However Samiullah Shenwari and Najibullah Zadran had other ideas and shared a spirited stand of 86 in 112 balls for the seventh wicket.

Spinner Dan Vettori got two wickets smartly to complete his 300 in ODIs, the first New Zealander to the milestone. He was on a hat-trick a little later, the Afghanistan batsmen baffled by his flight and variations.

Lefthander Najibullah lifted Tim Southee onto the roof of the Harris stand - and was dropped off a skier at deep square leg next ball by Guptill - and played a string of aggressive shots.

When Southee delivered the first ball in the second power play, Najibullah swung him hard and far back on the grass bank.

His second ODI 50 came off 52 balls but unfortunately or Afghanistan that's where it ended, as he speared a catch to third man off Adam Milne.

Shenwari was more circumspect but played some handsome drives and lofted a six into the crowd at mid wicket off Anderson on his way to his second fifty of the cup - and 10th overall - in 101 balls.

He also recovered from a solid blow on the back of his helmet from an Anderson bouncer, which left a distinct dent. He needed a few minutes treatment in the following over after dropping to his haunches.

Vettori's four for 18 were the pick of New Zealand's bowling figures. Trent Boult was among the wickets early and finished with three for 34 off his 10 overs while Anderson picked up two and Milne one.