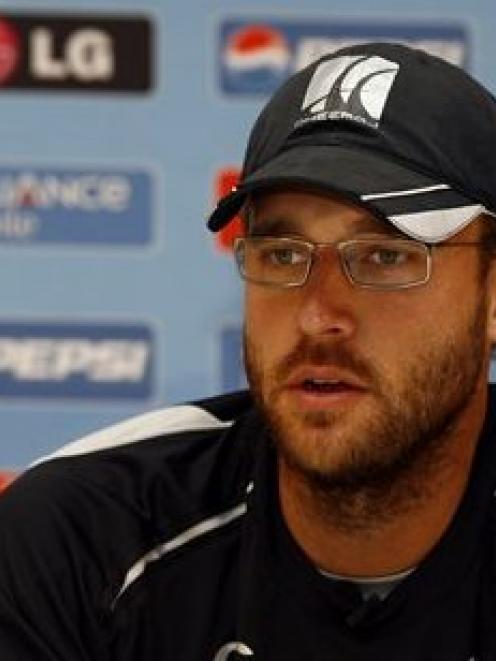 Daniel Vettori
A cricket career that has inspired millions is set to culminate in one of sport's grandest cathedrals tomorrow when New Zealand play their inaugural World Cup final against Australia.

Father Time suggests Daniel Luca Vettori will walk out for his final international.

His cricket-playing epitaph needs to be simple. Perhaps: Vettori - veni, vidi, vici… I came, I saw, I conquered.

As New Zealand's youngest test and one-day international debutant, and now the most experienced, he certainly came and saw. The third strand of the famous dictum will fit perfectly if New Zealand triumph tomorrow.

Just seeing 'DL Vettori' on a team sheet adds a different psychological dimension for both teams.

The Herald recently described his senior New Zealand role in wombling parlance, as "a Great Uncle Bulgaria-like figure in a team full of Tomsks", but he might be more like Tobermory; an active handyman who gets things done. Vettori's workshop has involved 22 yards of clay surrounded by, preferably, as big an acreage as possible.

He is one of just five bowlers, since the July 2005 introduction of increased one-day international fielding restrictions, to bowl more than 1000 balls and concede less than four runs an over (3.98). The others are South Africa's Shaun Pollock, Australia's Glenn McGrath, Zimbabwe's Ray Price and Pakistan's Mohammad Hafeez.

That's what appeals about Vettori's role on the Melbourne Cricket Ground's two hectare expanse. The 'G' is a verdant carpet where players need to apply more conservatism. The usual brand of big-hitting might need to be more selective if it's to breach distant ropes. Vettori is a sponge for mopping up splashes of high run-rates.

For those aged 25 or younger, his presence will extend to their cricketing horizons.

Bespectacled, with shoulder-length hair and a benign run-up disguising a penetrative arsenal of deliveries, his composure was freakish as New Zealand's youngest debutant at 18 years and 10 days against England at the Basin Reserve in February 1997. He made his ODI debut the following month. He has amassed 362 test and 305 ODI wickets since. From an unassuming teenager, picked after two first-class games, he has become a colossus of experience.

Vettori has now played international cricket more than half his life. His working days have involved bowling, hitting, fielding and catching a ball. However, he has rarely lost his sense of composure. That has been as evident as ever in the past couple of weeks.

The senior pro's batting and fielding has had as much impact as his bowling in the knock-out World Cup matches. What's referred to as the 'Air Vettori', in a nod to basketballer Michael Jordan's iconic brand, saw West Indian Marlon Samuels removed in the quarter-final when Vettori caught him on the third man boundary.

His 16 from 10 balls to nullify Bangladesh with seven balls to spare was vital in Hamilton, and an scorebook which reads '7' and '6' in Vettori's runs and balls columns against South Africa tells a limited tale given what he faced entering with 29 runs required off 17 balls.

Couple that with 15 tournament wickets at 18.80, an economy rate of 3.98 and an intangible presence behind the scenes; it makes a compelling case for the team MUP (the most unsung player).

There have been few career flashpoints. The verbals with Faf du Plessis in the 2011 World Cup quarter-final saw him fined the majority of his match fee, then many felt his 2008 outburst from the balcony at The Oval was justified when New Zealand won after England captain Paul Collingwood had earlier refused to recall Grant Elliott when he was barged over and run out in an ODI.

However, for these incidents to be almost the extent of his playing vices speaks volumes for Vettori's legacy. He has become respected and marketable worldwide as a ubiquitous cricketer who transcends cultural divides. Mention you're from New Zealand in any restaurant on the subcontinent and the next three words are inevitably "Ah, Daniel Vettori". He's assumed a mantle once dominated by Sir Richard Hadlee.

At the 2006 Champions Trophy in Mumbai a waterfront billboard indicated his growing impact on the Indian market. He was advertised holding a toothbrush as a bat. Within two years he was part of the inaugural Indian Premier League and last year became coach of the Royal Challengers Bangalore. Now he's expected to expand his mentoring empire at the Big Bash's Brisbane Heat.

Perhaps the most extraordinary thing is how Vettori survived 18 years in the public spotlight while still retaining an air of mystery. Not for him airbrushed stories synonymous with women's magazines. He and his family have earned the right to privacy; although seeing his wife, children and parents come to the balcony to greet him at the conclusion of his record 112th test for New Zealand against Pakistan evoked equal sentiments of joy and poignancy at the end of his test career.

Vettori contemplated retiring from 50-over cricket after the last World Cup, when he stood down as captain. Now we are faced with what seems the genuine article.

The innocuous run-up with ball firmly gripped in left hand, bespectacled face peeking from behind right armpit, followed by deliveries capable of tempting and frustrating in equal measure will soon be no more, at least on the international stage. His ability to swat, nurdle and slug out a batting career using extraordinary hand-eye co-ordination as his compass will also cease. A love of baseball always seemed to feature prominently in the make-up of his technique. Even his scamper for a bye against South Africa on Tuesday in the final over, to feed Grant Elliott the strike, generated a collective roar.

Vettori's perseverance rehabilitating from an Achilles tendon injury that threatened his career and the steel that knitted a relatively weak team together as skipper during 2007-11 are added hallmarks of determination that led to cricketing greatness.

It's time to celebrate his services for a final hurrah before the white picket fence eases shut behind him.

- By Andrew Alderson of the New Zealand Herald