Cricket: Running the rule over the Black Caps 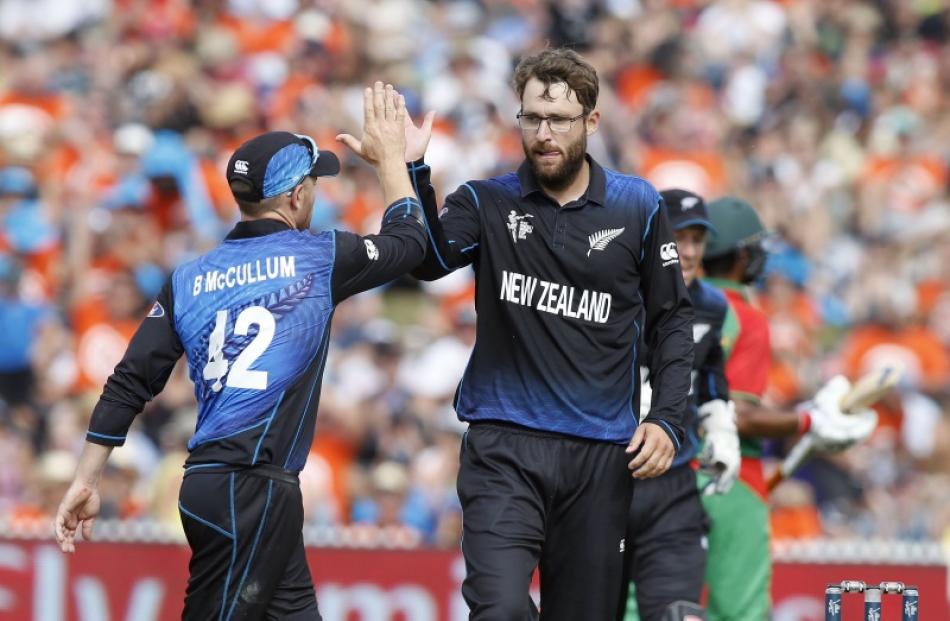 Brendon McCullum: Started with three boundaries off his first four balls against Sri Lanka and set the template. Never wavered from his assertive approach and gave his bowlers all possible encouragement with his field settings. How he didn't do himself major damage in the field was a miracle. Took a strike rate of 191.81, the best of the tournament, into the final. A fabulous campaign. 9

Martin Guptill: His stunning unbeaten 237 against the West Indies was the clear high point. Put behind him an up and down lead-in to score 532 runs at 76.0, both the top marks for New Zealand. Two run-outs with good mate Ross Taylor the only blot. Added real value in the field. 8

Kane Williamson: Not the impact anticipated. Just a solitary 50 among 222 runs at 37, but his nerveless six to beat Australia at Eden Park is one of the moments of the Cup. 6

Ross Taylor: Not at his best, well below his career average and battled to get close to run-a-ball rate. One 50, against Bangladesh, and was in the wars running between wickets. You'd like him to end with a flourish in Melbourne tomorrow. 5

Grant Elliott: Struck the most-watched shot in the Cup to get New Zealand into the final and so justified his surprise selection. A low maintenance squad member with a cool head. It can now be asked why he was on the outer for 14 months until the Sri Lankan series in January. Bowling negligible. 7

Luke Ronchi: Few chances with the bat - his best contribution came first up against Sri Lanka - and didn't really fire when he did get them. Glovework mostly tidy although sharp miss off Quinton de Kock in the semifinal could have been costly. 7

Dan Vettori: Splendid finale to his career. His spell against Australia at Eden Park was the cleverest of the tournament, quick swing bowlers notwithstanding. Fifteen wickets at 18, economy rate less than four an over. Too smart, and used all that knowledge stashed away over 15 years expertly. 8

Adam Milne: Lively and a decent point of difference, as New Zealand, reasonably enough, kept describing the young quick. Just five wickets at 39, and not needed as much as expected due to the Big Three's performances. Unlucky with a heel injury before the semifinal. 5

Tim Southee: His seven for 33 against England was among the best spells in the Cup. Had a couple of off days but good foil for Boult. 7

Trent Boult: The top wicket taker, the cutting edge with the new ball. His numbers tell the story. A bit expensive at times? Yes, but just count those wickets. 8

Matt Henry: The late call-up for the luckless Milne and did well in the semifinal. Good pace and kept quality batsmen in check until AB de Villiers and David Miller got stuck in. Bright future. 6

Mitchell McClenaghan: Played one game, against Bangladesh, the final pool match. Not good. Unlucky in that he hadn't bowled for 42 days previously. 2