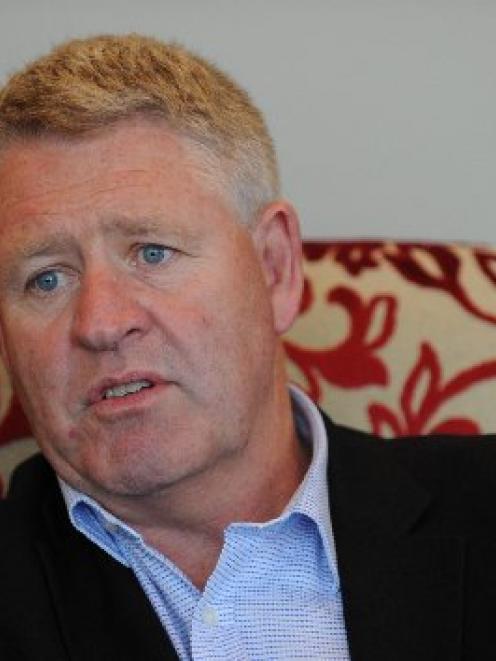 Steve Tew. Photo by Gerard O'Brien
Go into liquidation and start again. That emerged yesterday as the probable future for the Otago Rugby Football Union and for Otago rugby.

No white knights have appeared to save the day, and the union's debts are considered insurmountable.

"The best way forward, to have strong community rugby in the future and have an ITM Cup team, is to clear the books."

ORFU chairman Wayne Graham said financial commitments of $300,000 had been received over the past two days.

He had been heartened by the commitment of sponsors and individuals after the decision by the union to go into liquidation this Friday and cease trading.

"We have got some commitments of up to $300,000 in the past two to three days from various individuals.

"We need to work through this quickly and then try and work on securing our players," he said.

"It is a complicated issue, that is for sure. But the amount of money we need is not insurmountable. And we would hope that we are able to secure it.

"But we have to have a balance sheet which is clear. We can't survive if we have a $2.35 million debt on our books. We could probably get the business to work if we did not have that debt."

Forsyth Barr managing director Neil Paviour-Smith, of Wellington, predicted a new union could emerge from the liquidation, supported by the NZRU, sponsors and Otago rugby clubs, and believed there was still time for it to be organised and compete in this year's ITM Cup.

That would be "bad news" for existing ORFU creditors, but would allow a new union to operate without the burden of old debts, Mr Paviour-Smith said.

The main issue is how creditors, also prospective sponsors, would greet liquidation.

There had been discussions with other parties yesterday but Mr Graham said nothing had come out of the meetings which had him "jumping for joy".

The union needed to write off the debt, come to some arrangement to play at the stadium and have some confidence it had the revenue streams to survive.

He estimated the union needed more than $1 million to compete in the ITM Cup this year.

That would be about $600,000 on players and the rest on items including medical staff, flights and accommodation.

Whether the team is coached by Tony Brown, who was appointed head coach late last year, is undecided.

Mr Graham said he had been in contact with Mr Brown to tell him what had happened.

Mr Brown, coaching in Japan, was due back in Dunedin next month to begin preparations for the provincial season.

"He [Mr Brown] has got to make some decisions for himself and his family. But it would be fair to say he was dismayed with the situation, as we all were."

Mr Tew said the union would not be formally wound up until April 23.

At that stage, the clubs could get together and reincorporate and reapply to the NZRU.

"It would be fair to say, without pre-empting any decisions our board will make in the future, that any application for incorporation will have to have constitutional changes that reflect the skills needed."

The right mix of people was needed on the board, which he felt was too big and needed more independent directors.

Delivering the news brought no pleasure to Mr Tew.

"There were tears rolling up in some of those staunch loyal guys, the life members ... We want Otago rugby to be in the ITM Cup. We do not want to get rid of 131 years of history," he said.

"Do we need to have some realism brought into this world? Do we need to send a message that we can't constantly loan money to unions to live beyond their means? Yes, we have reached that point."

The Otago union would not be privatised even if some investors were found, because the national union now owned all the intellectual property.

"They [ITM Cup players] will have a life outside rugby. Some might be in academies, but most will be picked on form this year, and paid a modest amount to play in this competition."

With the union saddled with a $2.35 million debt, Mr Tew doubted there would be any last-minute rescue.

Former NZRU boss David Moffett said he had contacted the ORFU yesterday and offered his services.

The situation could be turned around and the focus should be on negotiating debt reduction and increasing revenue, he said.

He was well-placed to get the union out of its financial dilemma. He had reduced the Welsh Rugby Union's debt while its chief executive.

"There will be ways of doing it," Mr Moffett said.