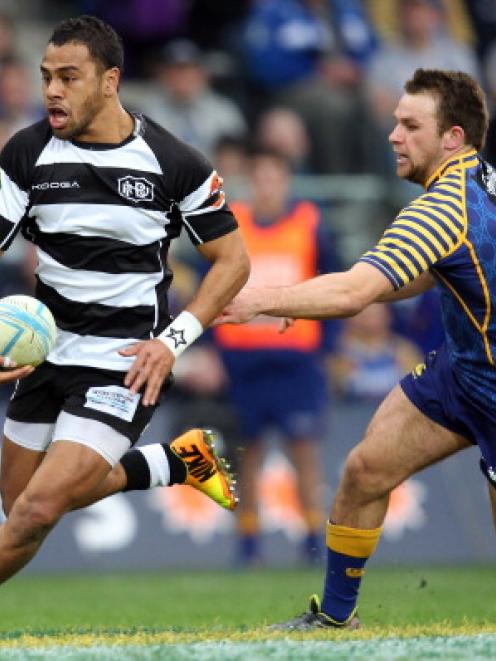 Telusa Veainu of Hawkes Bay makes a break. (Photo by Rob Jefferies/Getty Images)
Nine days after breaking a 56-year hoodoo, Otago has lost the Ranfurly Shield in its first defence.

Despite the urgings of large and passionate crowd at Forsyth Barr Stadium, Otago was beaten 20-19 by a well-drilled Hawkes Bay side.

The Magpies last lifted the Shield in 1969 and the celebrations will continue long into the night after their success at Forsyth Barr Stadium in front of a noisy crowd of 20,000.

The majority of the support under the roof was for Otago, who lost the Shield in their first defence since beating Waikato in Hamilton nine days ago. Otago had last held the Shield in 1957 - who knows when they will next win it.

Otago first-five Hayden Parker was the unfortunate villain. In the final seconds he had a chance to win the game with a dropped goal but waited too long and his eventual effort, after a long series of rucks, was charged down.

Earlier, he missed a conversion from a relatively handy angle which also would have won the game, although it was his run and pass which put wing Buxton Popoali'i over for the try.

Referee Mike Fraser will also be in the spotlight for failing to penalise Hawkes Bay prop Ben Franks for attempting to kill the ball in a ruck when right in front of his own posts as the minutes ticked down.

The ruckus will mean little to the Magpies, though, who face Counties Manukau in their first defence at McLean Park on Saturday.

Hawkes Bay, who were disappointing in losing their grudge match to Bay of Plenty in Tauranga last week, began nervously, but soon took control through their big men, especially No8 Mark Atkins and lock Mark Abbott, which allowed halfback Alby Mathewson and first-five Ihaia West to work their magic. It was West's individual try halfway through the second half which pushed the score out to 20-9 and virtually shut the door on the home side.

Centre Richard Buckman also shone for Hawkes Bay. It was his run around Tom Donnelly and offload to Gillies Kaka which led directly to Telusa Veainu's try in the first half and the visitors took that confidence and momentum on to the field after the break.

The sight of All Blacks prop Franks taking to the pitch for the start of the second half for his Hawkes Bay debut suggested things wouldn't be getting any easier for Otago, and so it proved, with the Magpies taking control of possession and territory. West's incredible individual try, which he converted, was the killer punch, the 21-year-old looking an increasingly good prospect.


Otago gave themselves a chance of overhauling the big deficit when centre Jayden Spence capitalised on No8 Paul Grant's big break but Parker's missed conversion made the task that much harder. At 20-14 it was Hawkes Bay's match to lose, and incredibly, they almost did.

Buxton Popoali'i's jinking run put Otago on the attack with nine minutes left _ the wing winning a penalty which Otago elected to kick for touch rather than goal but it proved a good decision when Parker's run put him in for a try.