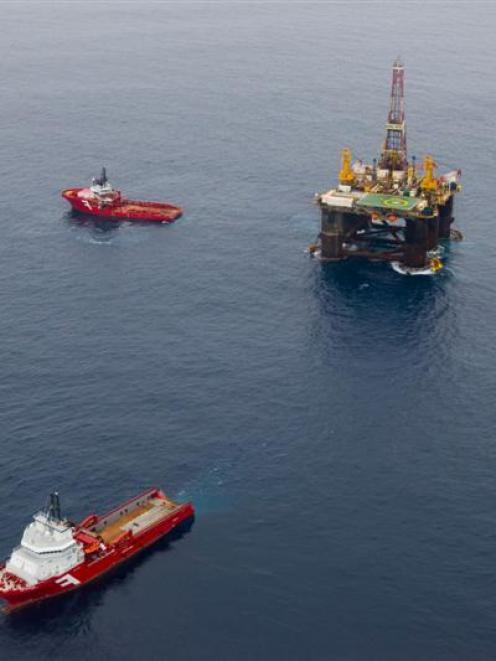 Positive results from test drilling, such as from Kan Tan IV, pictured four years ago with two supply vessels and which arrived back in the country a month ago, could result in New Zealand being re-rated as a more favourable place to explore for oil and gas. Photo supplied.
Up to three drilling rigs and a drill ship are due in New Zealand over the next 12 months and, depending on results, the country could be ''re-rated'' as a more favourable destination for oil and gas explorers.

New Zealand Oil and Gas chief executive Andrew Knight, who was in Dunedin this week, said the four rigs would drill up to 12 holes.

''This is an exciting time for us and the industry if we can secure some investment back into the [oil and gas exploration] industry,'' he said when contacted yesterday. Much of New Zealand's 10 wider seabed basins are considered high-risk frontier territory and with shale oil discoveries and increasing fracking onshore, investment interest could soften.

Data from the report released this week by the Ministry of Business, Innovation and Employment tells two tales of the oil and gas sector.

Oil exploration and development expenditure was up at historic levels, totalling $8.3 billion for the six years to 2012. The second-highest annual spending, $1.47 billion, was in that year and overall drilling activity was the highest in 10 years.

Although offshore drilling had waned to just two holes in 2011, this year expectations are for 13 holes offshore and 27 onshore.

Mr Knight believed that 10 to 12 wells could be drilled during the coming year, including some ''workover'' wells to replace existing wells, as opposed to new exploration.

''If two of the 12 wells come in [with positive oil and gas shows], New Zealand could be re-rated as an investment decision, which in turn reduces costs for the industry,'' he said.

New Zealand has 10 main exploration basins, further defined into numerous smaller basins, most of which are unexplored, with Taranaki producing oil from 19 fields. It is exported for refinement, being of higher quality than the imported oil used at Marsden Point.

The semi-submersible rig Kan Tan IV has already arrived in the country, new drill ship Noble Bob Douglas is scheduled to drill off Taranaki and Otago, Ensco 107 is scheduled to come here within a year and a fourth, jack-up, rig could also come to New Zealand.

Mr Knight said the country's oil and gas explorers, both domestic and internationally based, worked collaboratively and could schedule their respective uses of hydrographic vessels, drilling ships and rigs to reduce costs.

The costs of hydrographic vessels, which undertake seismic testing at sea, can run to $US250,000 ($NZ317,000) a day. Drill rig costs start at $US30 million for one shallow water drilling programme, or more than $US100 million for a deep-water programme. Kan Tan IV arrived in New Zealand in mid-August, and was being readied for towing to the offshore Taranaki Matuku field, which is west of the mature offshore Maui gas field and southwest of the Tui field. OMV New Zealand has a 65% holding in Matuku, Octanex NL 22.5% and NZOG 12.5%, according to NZResources.com.

Moored in 135m, Kan Tan IV is expected to drill to 4850m at Matuku before moving to other Taranaki drill sites.