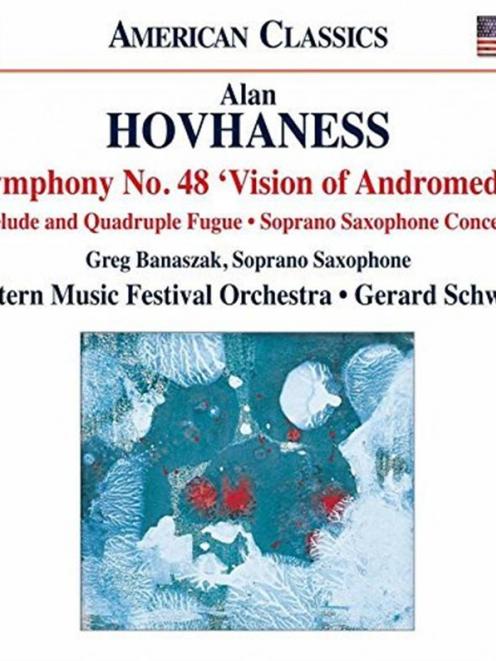 American composer Alan Hovhaness (1911-2000) wrote 67 symphonies and other music (including sounds of whales in one work) making a remarkable legacy that stamps his place in 20th-century music.

Gerard Schwarz conducts the orchestra in a world premiere recording of the symphony (Op.355 written in 1988) which is aptly subtitled Vision of Andromeda because the composer was ''inspired by the wonders and mysteries of astronomy''.

This very original half-hour of music expresses the vastness of a galaxy through huge melodies, shimmering orchestral colours and a transcendent finish.

Probing from planet Earth into space, the work certainly makes a big impression on the listener. Its majesty and mystic feel impelled my immediate replay.

There is much admirable use of solo winds, gongs, bells, and drums.

The CD opens with Hovhaness' short Prelude and Quadruple Fugue, written in 1936 when he was 25 but revised in 1954. It has three movements showing his mastery of counterpoint and sweeping to a thrilling climax.

Greg Banaszac is the soloist in the light-hearted Concerto for Soprano Saxophone and Strings written in 1980, three movements lasting 19 minutes.

He is instructed to sing the notes at the upper registers of the instrument rather than be challenged for virtuoso technique.

The orchestra is a group of professional musicians and teachers who gather in Greensboro, North Carolina, every summer to perform and to teach promising young musicians.

They play impressively on this CD.