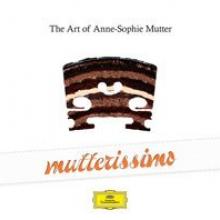 At age 13 Mutter, the German star violinist, appeared at the1976 Lucerne Festival. The following year she debuted at the Salzberg Festival under Herbert von Karajan and in 1978 her first in a great stream of recordings was released by Deutsche Grammophon. The international career of the "child prodigy" was well launched and she has stayed in the top strata of the world’s violinists ever since, being what the New York Times hailed as a "complete musician".

She went on to make records with Karajan and others that include many world premieres of new works by leading composers. She also set up her own foundation for highly gifted young musicians, her commitment to the next generation.

These two programmes (personally chosen by the violinist) are a compilation that shows Mutter’s technical skill, and great insight by the way she makes her music breathe yet always skip along with great freshness and lyricism. They invite listeners to two tours of Anne-Sophie Mutter’s multiple worlds of music.

CD one brings together recordings dating mainly from the last 20 years. It explores the highways and byways of the core repertory, featuring well-known works for violin and orchestra by Dvorak and Schumann alongside less familiar pieces.

CD two focuses on a sonata and single-movement works, often with Mutter’s long-standing piano partner, Lambert Orkis, and combines virtuosity with popularity, all with great emotion and energy.

My personal favourites among 26 tracks are movements from Korngold’s, Brahms’ and Stravinsky’s Violin Concertos,  Prokofiev’s Violin Sonata, and Brahms’ Hungarian Dance No1. There’s some Bach, Schubert, Mendelssohn and other choices, including  Gershwin’s It Ain’t Necessarily So, and Benjamin’s Jamaican Rumba for lighter music. It all sparkles.